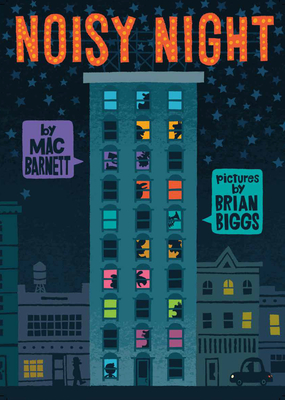 It's a noisy night in this city building! The residents of each floor can hear their neighbors above them, and are wondering what's going on above their heads. Climb floor by floor and page by page to find out whose singing, dancing, cheering, and cooing are keeping a grumpy old man awake.

With innovative split-level spreads that offer the feeling of climbing an apartment building floor by floor, this clever and colorful collaboration between New York Times–bestselling author Mac Barnett and gifted illustrator Brian Biggs offers an irresistible investigation of one noisy night.

Brian Biggs is the illustrator of approximately one bazillion children's books (including Mac Barnett's Noisy by Night and Wendelin Van Draanen's Shredderman series), some of which he also wrote (such as The Space Walk and Everything Goes). Brian creates his pictures in an old, one-story garage studio in Philadelphia, Pennsylvania. He lives with his wife and teenage kids nearby in a three-story house, right next to some very noisy neighbors.

"Story after story of silly surprises and sounds."—Kirkus, starred review