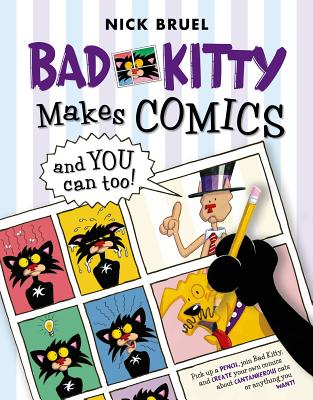 Kitty is bored. She is so bored, in fact, that she even considers playing with that slobbering mutt Puppy, who lives in her house. Nah. Instead, she thinks she'll take a nap. That is, until there is a knock on the door . . .

Strange Kitty is here to guide both Kitty and Kitty's fans through the world of making comics. Like to draw? Great! Here's your chance to show off your skills! Don't know how to draw? That's okay! Through guided exercises you will learn all about how comics work, including sections on panelling, sound and visual effects, word balloons and so much more!

With such fun activities and a hilarious story to boot, this is bound to be a Bad Kitty favorite!

“* Surprisingly (and sneakily) instructional, totally hilarious . . . and worth every penny.” —Kirkus Reviews, starred review on Bad Kitty Drawn to Trouble

“Bruel's sky's-the-limit attitude will encourage boys and girls to use their imaginations and get writing.” —Booklist on Bad Kitty Drawn to Trouble

“In this seventh installment in the series, readers are introduced to the process of writing and illustrating a book in a fun and humorous way.” —School Library Journal on Bad Kitty Drawn to Trouble

“BAD BEHAVIOR!” —The Horn Book on A Bad Kitty Christmas

“A witty and original take on the old Christmas Eve chestnut, with a sweet twist to season the fun.” —Kirkus Reviews on A Bad Kitty Christmas

“* An alphabet book that should be in every collection. Even the alphabet-experienced will love this bad, bad kitty!” —Kirkus Reviews, starred review on Bad Kitty

“Will have youngsters howling with laughter.” —Publishers Weekly, starred review on Bad Kitty

Nick Bruel is the author and illustrator of the phenomenally successful New York Times bestselling Bad Kitty series, including the 2012 and 2013 CBC Children's Choice Book Award winners Bad Kitty Meets the Baby and Bad Kitty for President. Nick has also written and illustrated popular picture books including Who Is Melvin Bubble?, Bob and Otto, and his most recent, A Wonderful Year. He lives with his wife and daughter in Westchester, New York.
Loading...
or support indie stores by buying on