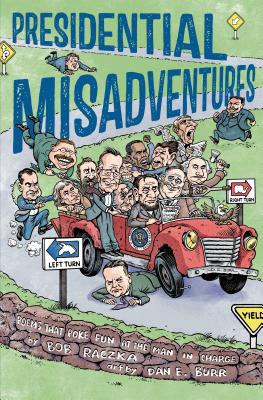 Poems That Poke Fun at the Man in Charge

A spoonful of poetry helps the mockery go down! This collection of presidential poems is historical and hysterical.

The clerihew is a simple poetic form specifically invented to make fun of famous people—and who is more famous than the misbehaving presidents of the United States? Here are forty-three poems teasing the commander-in-chief that are fun to read aloud and even more fun to write yourself. From the author of the incredibly inventive Lemonade: And Other Poems Squeezed from a Single Word comes a new collection filled with zingers, humdingers, and Presidential Misadventures.


Praise For Presidential Misadventures: Poems That Poke Fun at the Man in Charge…

“These poems are satisfying bursts of sarcasm and wit.” —Publisher's Weekly

“Lighthearted and entertaining, Raczka's irreverent quatrains show middle graders no figure is too lofty for some poetic play.” —Kirkus

“A jovial collection . . . Share these aloud with history buffs or to enliven the classroom.” —Booklist

Dan E. Burr is an illustrator and cartoonist who has won several Eisner and Harvey Awards. He created the artwork for Kings in Disguise and On the Ropes, both written by James Vance. He is also the illustrator of Presidential Misadventures: Poems That Poke Fun at the Man in Charge.
Loading...
or support indie stores by buying on