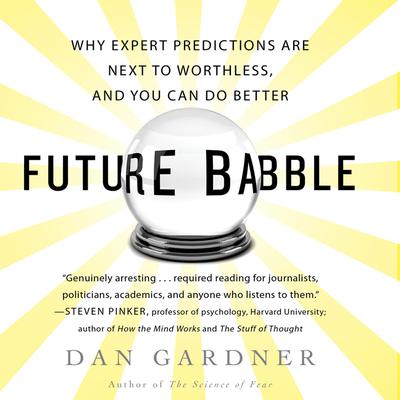 Why Expert Predictions Fail - and Why We Believe Them Anyway

In 2008, as the price of oil surged above $140 a barrel, experts said it would soon hit $200; it then plunged to $30. In 1967, they said the USSR would be the world’s fastest-growing economy by 2000; by 2000, the USSR no longer existed. In 1911, it was pronounced that there would be no more wars in Europe—we all know how that turned out. The truth is that experts are about as accurate as dart-throwing monkeys. And yet, every day we ask them to predict the future—everything from the weather to the likelihood of a catastrophic terrorist attack.

Here is the first book to examine this phenomenon, showing why our brains yearn for certainty about the future, why we are attracted to those who predict it confidently, and why it’s so easy for us to ignore the trail of outrageously wrong forecasts. How good you are at predicting the future doesn’t depend on your education or experience. It depends on how you think: like a fox or like a hedgehog. Foxes know a little about a lot of things. They have doubts. They often sound wishy-washy. And you don’t see them on television much. On the other hand, hedgehogs know a lot about one thing. They are absolutely certain. They are confident. Almost every popular expert you can think of is a hedgehog. And they are experts at explaining away predictions they made that turned out to be wrong.

For real insight into what is coming next, you need to consult foxes and think like one, too. Future Babble explains in detail what that means, and how you can tell foxes and hedgehogs apart. In this example-packed, sometimes darkly hilarious audio book, journalist Dan Gardner shows how seminal research by UC Berkeley professor Philip Tetlock proved that the more famous a pundit is, the more likely he is to be right about as often as a stopped watch. Gardner also draws on current research in cognitive psychology, political science, and behavioral economics in delivering this reassuring message: The future is always uncertain, but the end is not always near.