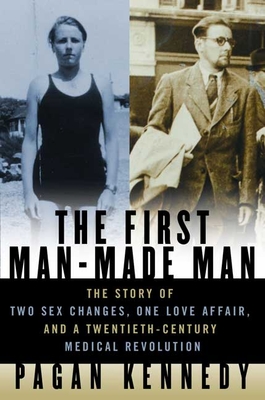 The Story of Two Sex Changes, One Love Affair, and a Twentieth-Century Medical Revolution

In the 1920s when Laura Dillon felt like a man trapped in a woman's body, there were no words to describe her condition; "transsexuals "had yet to enter common usage. And there was no known solution to being stuck between the sexes. Laura Dillon did all she could on her own: she cut her hair, dressed in men's clothing, bound her breasts with a belt. But in a desperate bid to feel comfortable in her own skin, she experimented with breakthrough technologies that ultimately transformed the human body and revolutionized medicine. From upper-class orphan girl to Oxford lesbian, from post-surgery romance with Roberta Cowell (an early male-to-female) to self-imposed exile in India, Michael Dillon's incredible story reveals the struggles of early transsexuals and challenges conventional notions of what gender really means.


Praise For The First Man-Made Man: The Story of Two Sex Changes, One Love Affair, and a Twentieth-Century Medical Revolution…

Praise for The First Man-Made Man:"This book is pure brilliance--the research, the execution, the wonder and heartbreak. What an incredible story. What is it to be a human being? Who are we? Everyone should read this book as we stumble through our lives."--Natalie Goldberg, author of Writing Down the Bones and The Great Failure Praise for Black Livingstone:
"Her writing shines."-New York Times Book Review
"[Kennedy] restores a forgotten life, crafting an enticing portrait of a man whose accomplishments defied the narrow and racist limitations of his times."--Boston Globe
Praise for The Exes: "A thoughtful, spirited tale."--Entertainment Weekly
"Kennedy writes with a sweet, trenchant wit and the delicacy of a modern-day Chekhov."--San Francisco Chronicle

Pagan Kennedy has published seven books. Her biography Black Livingstone was named a New York Times Notable. Her novel Spinsters was short-listed for the Orange Prize and was the winner of the Barnes & Noble Discover Award. She has written for the New York Times magazine, Boston Globe magazine, the Village Voice, Details, the Utne Reader, the Nation, and Ms. magazine. She lives in Somerville, Massachusetts.
Loading...
or
Not Currently Available for Direct Purchase