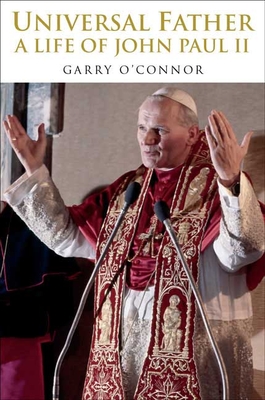 A Life of John Paul II

Pope John Paul II will go down in history not only as the third longest serving pope, but possibly the most politically influential of all 305 popes and antipopes since St. Peter.

Born in Poland in 1920, Karol Wojtyla's early life was filled with intense love and intense loss: he was eight when his mother died, twelve when his older brother died of scarlet fever, and twenty when his severe but loving father died during the Nazi occupation. An avid soccer player and skier, a gifted poet, playwright and actor, by 1944, after a near fatal accident, Wojtyla was studying for the priesthood in secret. Garry O'Connor, an accomplished biographer of the likes of Sir Alec Guinness, Ralph Richardson and William Shakespeare has spent the last five years writing and researching this book. Unlike the competition, this book details not only Wojtyla's life before he became pope, his friendships with men and with women, his nationalism, his early years as a priest in rural Poland and his travels to Rome, but it also explores the pope's own poems, plays, and philosophical works to find clues to what makes him tick.

Praise For The Universal Father: A Life of John Paul II…

"A warm, humane, and lively portrait, fresh and original in its depiction of the pope."

Garry O'Connor has been a major and prolific English biographer since his life of Ralph Richardson, published in 1980, was hailed in The New York Times Book Review as Stunning... the best biography of an actor I've ever read, and by the London Sunday Times as an astounding book, original in form and fascinating in content. He has subsequently written highly praised lives of Sean O'Casey, Peggy Ashcroft, Paul Scofield and William Shakespeare and, most recently, Alec Guinness. He lives in England with his wife and six children.
Loading...
or
Not Currently Available for Direct Purchase