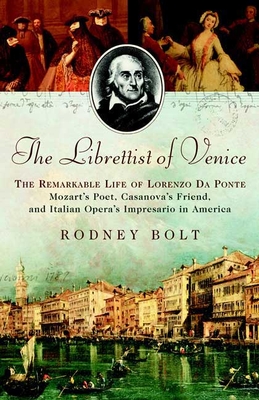 The Librettist of Venice

The operatic life of the librettist for Don Giovanni and The Marriage of Figaro.

In 1805, Lorenzo Da Ponte was the proprietor of a small grocery store in New York. But since his birth into an Italian Jewish family in 1749, he had already been a priest, a poet, the lover of many women, a scandalous Enlightenment thinker banned from teaching in Venice, the librettist for three of Mozart's most sublime operas, a collaborator with Salieri, a friend of Casanova, and a favorite of Emperor Joseph II. He would go on to establish New York City's first opera house and be the first professor of Italian at Columbia University. An inspired innovator but a hopeless businessman, who loved with wholehearted loyalty and recklessness, Da Ponte was one of the early immigrants to live out the American dream.

In Rodney Bolt's rollicking and extensively researched biography, Da Ponte's picaresque life takes readers from Old World courts and the back streets of Venice, Vienna, and London to the New World promise of New York City. Two hundred and fifty years after Mozart's birth, the life and legacy of his librettist Da Ponte are as astonishing as ever.


Praise For The Librettist of Venice: The Remarkable Life of Lorenzo Da Ponte--Mozart's Poet, Casanova's Friend, and Italian Opera's Impre…

Rodney Bolt is the author of History Play, a speculative biography of Christopher Marlowe. He has worked as a writer and director and won travel-writing prizes in Germany and the United States. He lives in Amsterdam.