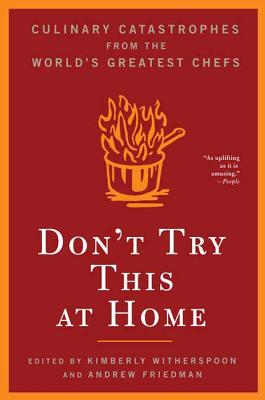 Don't Try This At Home

From Gabrielle Hamilton on hiring a blind line cook to Michel Richard on rescuing a wrecked cake to Eric Ripert on being the clumsiest waiter in the room, these behind-the-scenes accounts are as wildly entertaining as they are revealing. With a great, new piece by Jamie Oliver, Don't Try This at Home is a delicious reminder that even the chefs we most admire aren't always perfect-and a hilarious musthave for anyone who's ever burned dinner.

Praise For Don't Try This At Home: Culinary Catastrophes from the World's Greatest Chefs…

“As uplifting as it is amusing; it's a reminder that--in real life as in the kitchen--guts are as important as genius.” —People (four stars/Critic's Pick)

“If you liked Kitchen Confidential for its frank behind-the-scenes glimpses of kitchen life, you'll love this book.” —Los Angeles Times

“Once you've watched these masters of their universe drop a foie gras terrine into a bowl of warm chocolate sauce, restore a wedding cake accidentally covered with shards of glass, disguise a bag of dirty laundry with crème anglaise to stand in for a mound of fallen meringue--you'll realize you've probably gotten off easy.” —Washington Post Book World

“The chefs, now stars themselves, deserve credit for having managed to endure so much misery early in their careers, from tyrannical bosses, spoiled patrons, eye-rolling waiters and thuggish busboys. The best of the essays here convey that spirit of determination, alongside the absurd theater of it all.” —Wall Street Journal

Kim Witherspoon is a founding partner at Inkwell Management, a literary agency based in Manhattan, and the coeditor of How I Learned to Cook. She lives with her family in North Salem, New York.

Andrew Friedman specializes in books and articles about food, restaurants, and kitchen culture. He has authored or coauthored more than a dozen cookbooks.