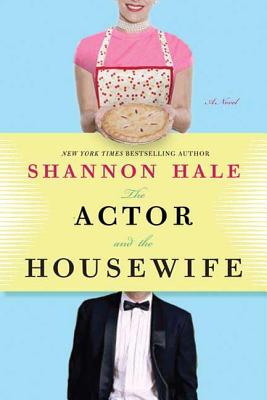 The Actor and the Housewife

“Becky Jack is a typical Mormon housewife until she stumbles into an unlikely, platonic friendship with handsome Hollywood actor Felix Callahan. This modern fairy tale asks the question of what happens when your secret celebrity crush starts to mix with your ordinary, happy home life. A delightful read!”
— Avery Dickey, Inkwood Books, Tampa, FL
View the List

Becky is seven months pregnant with her fourth child when she meets her dream actor Felix Callahan by chance. Twelve hours, one elevator ride, and one alcohol-free dinner later something has happened, though nothing has happened... it isn't sexual. It isn't even quite love. But soon Felix shows up in the Utah 'burbs to visit and before they know what's hit them, Felix and Becky are best friends. Really. Becky's husband is pretty cool about it. Her children roll their eyes. Her best (girl)friend can't get her head around it. But Felix (think Colin Firth) and Becky have something special... something unusual, something completely impossible to sustain. Or is it?

Shannon Hale's latest novel is at turns hilarious and heartbreaking, completely real, and utterly surreal too. One of those magical stories that explores all the permutations of what happens when your not-so-secret celebrity crush walks right into real life, and changes everything...

Shannon Hale's mother says she was a storyteller from birth, jabbering endlessly in her carriage as the two strolled through the neighborhood; once she could form complete sentences, she made up stories, bribing her younger siblings to perform them in mini plays. When she was ten, she began writing books, mostly fantasy stories where she was the heroine, and she continued writing secretly for years while pursuing acting in stage and improv comedy. After detours studying in Mexico, the U. K., and Paraguay, Shannon earned a bachelor's degree in English from the University of Utah and a Masters in Creative Writing from the University of Montana. In the interim, she submitted short stories and novels to magazines and publishers, saving all her rejection letters which she has since laminated into one continuous 60-foot roll which she proudly unfurls to audiences as a testament to her dedication and determination. Since the publication of her first book, The Goose Girl, in 2003, Shannon has become a beloved author to young readers as well as booksellers and educators. Her third novel, Princess Academy, earned her a Newbery Honor and is a New York Times, Book Sense, and Publishers Weekly bestseller. Shannon has also written books for adults, Austenland and The Actor and the Housewife. Shannon lives in Salt Lake City, Utah, with her husband, Dean, their children, and their pet, a small plastic pig.
Loading...
or
Not Currently Available for Direct Purchase