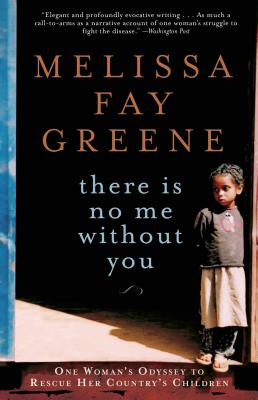 There Is No Me Without You

Two-time National Book Award nominee Melissa Fay Greene puts a human face on the African AIDS crisis with this powerful story of one woman working to save her country's children. After losing her husband and daughter, Haregewoin Teferra, an Ethiopian woman of modest means, opened her home to some of the thousands of children in Addis Ababa who have been left as orphans. There Is No Me Without You is the story of how Haregewoin transformed her home into an orphanage and day-care center and began facilitating adoptions to homes all over the world, written by a star of literary nonfiction who is herself an adoptive parent. At heart, it is a book about children and parents, wherever they may be, however they may find each other.

Praise For There Is No Me Without You: One Woman's Odyssey to Rescue Africa's Children…

“Greene's nuanced portrait of this heroine places Teferra at the center of a global crisis but never loses its focus on the innocent victims.” —People (four stars, Critic's Choice)

“Elegant and profoundly evocative writing…as much a call-to-arms as a narrative account of one woman's struggle to fight the disease.” —Washington Post

“A truly inspiring book…gripping and heartfelt…This is a story not to be missed.” —Christian Science Monitor

“A deeply personal chronicle of human suffering and sinister global politics…featuring orphaned children and devoted adults whose courage will inspire even the most skeptical.” —Chicago Tribune

Melissa Fay Greene is the author of No Biking in the House Without a Helmet, Praying for Sheetrock, The Temple Bombing, Last Man Out, and There Is No Me Without You. Two of her books have been finalists for the National Book Award, and New York University's journalism department named Praying for Sheetrock one of the top one hundred works of journalism in the twentieth century. She has written for The New Yorker, The Washington Post, The New York Times Magazine, Atlantic Monthly, Good Housekeeping, Newsweek, Life, Reader's Digest, Redbook, and Salon, among others. She and her husband, Don Samuel, have nine children and live in Atlanta.
or
Not Currently Available for Direct Purchase