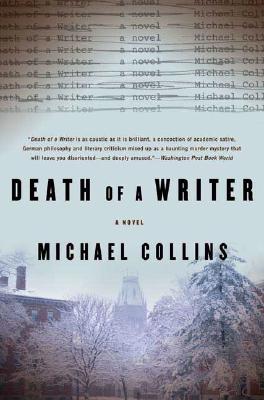 Death of a Writer

From Booker Prize nominee Michael Collins comes "a wonderfully creepy murder mystery" ("People"), about a novelist whose last hope for fame may be the deepest secret in his past.

For E. Robert Pendleton, a professor clinging to tenure and living in the shambles of his once-bright literary career, death seems to be the only remaining option. But his suicide attempt fails, and during his long convalescence, a novel is discovered hidden in his basement: a brilliant, semi-autobiographical story with a gruesome child murder at its core.

The publication of "Scream" causes a storm of publicity and raises questions about its content in particular, about the uncanny resemblance between Pendleton's fictional crime and a real-life, unresolved local murder. How did Pendleton know the case so well? And why did he bury "Scream" in his basement? A rare blend of suspense, humor and insight, "Death of a Writer" is "dark, disturbing and damnably good." ("Baltimore"" Sun").


Praise For Death of a Writer…

"A stunning tour de force that does a masterful dance through many genres."--Seattle Post Intelligencer
"Michael Collins tears into literary academe with great comic gusto."--New York Times Book Review
"Death of a Writer is as caustic as it is brilliant."--Washington Post Book World

Michael Collins is the author of six novels and two collections of short stories. His work has garnered numerous awards, including a Pushcart Award for Best American Short Story and The Kerry Ingredients Irish Novel of the Year. His novel The Keepers of Truth was shortlisted for the Booker Prize and the IMPAC Award. He lives in Bellingham, Washington.
Loading...
or
Not Currently Available for Direct Purchase