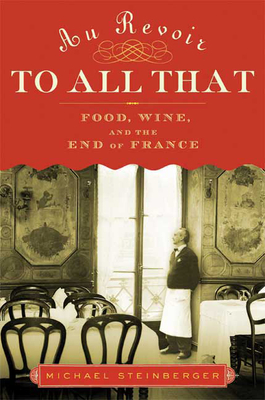 Au Revoir to All That

Food, Wine, and the End of France

A rich, lively book about the upheaval in French gastronomy, set against the backdrop of France's diminishing fortunes as a nation.
France is in a rut, and so is French cuisine. Twenty-five years ago it was hard to have a bad meal in France; now, in some cities and towns, it is a challenge to find a good one. For the first time in the annals of modern cooking, the most influential chefs and the most talked-about restaurants in the world are not French. Within France, large segments of the wine industry are in crisis, cherished artisanal cheeses are threatened with extinction, and bistros and brasseries are disappearing at an alarming rate. But business is brisk at some establishments: Astonishingly, France has become the second-most-profitable market in the world for McDonald's.

How did this happen? To find out, Michael Steinberger takes an enviable trip through the traditional pleasures of France. He talks to top chefs Alain Ducasse, Paul Gagnaire, Paul Bocuse winemakers, farmers, bakers, and other artisans. He visits the Elysee Palace, interviews the head of McDonald's Europe, marches down a Paris boulevard with Jose Bove, and breaks bread with the editorial director of the powerful and secretive Michelin Guide. He spends hours with some of France's brightest young chefs and winemakers, who are battling to reinvigorate the country's rich culinary heritage. The result is a sharp and funny book that will give Francophiles everywhere an entirely new perspective political, economic, personal, and cultural on the crisis in the country and food they love.


Praise For Au Revoir to All That: Food, Wine, and the End of France…

“[Au Revoir to All That] is an eye-opening, well-researched and amusingly written, reliable guide to the contemporary cooking scene in France, and it's to be hoped that French chefs somewhere will pay attention to Steinberger's neat formulation of the question – ‘Which way forward for French cuisine?’” —San Francisco Chronicle "A culinary expedition through France hunting for the root of the slow decline of the country’s acclaimed food and wine traditions... Steinberger’s meticulous research and personal hunger for objective truths bring surprising discoveries to light... connected to the larger issue of who or what defines modern France and, by extension, its food. An offering of fresh and engaging insights for foodies and Francophiles alike."—Kirkus Reviews "For anyone who cares about food, wine, or France... Au Revoir To All That is required reading. Steinberger has done remarkably thorough research to detail just what has gone wrong in French gastronomy. Drawing on astonishing tidbits like the identity of France's largest private sector employer (McDonald's), Steinberger convincingly explains why so many of its greatest chefs have grown complacent, its greatest gastronomic guide so off-track, and its winemakers just plain broke. In spite of all the bad news, the book is a ripping fun read and is even a little optimistic, as Steinberger points out a few key men and women bucking the trends." —FoodandWine.com “In the true voice of a passionate Francophile... Steinberger's love for the country is tangible through his descriptions of the food he eats and remembers eating, and somehow it makes sense that he fell in love with his future wife over a French meal. It's not an adolescent love that Steinberger has for the country, but more like adoration mixed with a dose of reality.” —Minneapolis Star-Tribune “Informative… [Steinberger’s] fascinating profiles of influential French chefs and restaurateurs include Paul Bocuse, Alain Ducasse, and the late Alain Chapel and Jean-Claude Vrinat of Taillevent in Paris…[an] excellent narrative.”  —Pittsburgh Tribune Review "France once embodied the crowning glory of culinary art, but the most serious gastronomes today turn
increasingly elsewhere for inspiration. Because French food’s hegemony was simply assumed as little as
two decades ago, Steinberger marvels at this precipitous decline in Gallic reputation. His investigation
finds manifold causes for this state of affairs."  —Booklist

“One of the greatest books I’ve read.” —Marco Pierre White

"In Au Revoir To All That, Mike Steinberger pulls off the magic trick of throwing a funeral you want to go to: The elegy is unflinching but heartfelt and celebratory; the guests are the most interesting people; the food (and wine) couldn't get any better; and—get this—the deceased shows signs of rising again." — Benjamin Wallace, author of New York Times bestseller The Billionaire's Vinegar"Au Revoir to All That is a fascinating and knowledgeable valedictory to the greatest food and wine culture the world has ever known. Michael Steinberger is a great gourmand and a great storyteller, and he will make you care about the fate of camembert and other endangered traditions." — Jay McInerney, author of A Hedonist in the Cellar and Bacchus & Me "Most books on food and wine are misty-eyed memoirs of great meals and happy times. Michael Steinberger's book is different; he is trying to understand the decline and fall of France as the center of the world's great cuisine. In the course of his explorations, Steinberger takes us to the kitchens of great chefs, describes extraordinary food, and evokes fond memories. The result turns out to be intelligent, interesting and complicated. You will have to read the book to get it— and you will read it with much pleasure."— Fareed Zakaria, author of The Post-American World "If you've ever wondered why eating in France is so often disapponting, Michael Steinberger can explain. His delicious account draws not just on his amazing gastronomic expertise, but on a sophisticated understanding of French politics and history as well. Three stars: this one really is worth a special trip." — Jacob Weisberg, author of The Bush Tragedy and editor of Slate "When I started going to France in the early seventies, it was difficult to find a lousy meal over there. Now the exact opposite is true. How could a country with such an esthetically magnificent culture go wrong? Steinberger's penetrating report from a declining France resonates because he clearly loves the place and feels a sense of loss. Where did their taste go?  I thank him mille fois for digging into the when, wheres, hows, and whys. Anyone with the slightest interest in France will appreciate this book, too.”— Kermit Lynch, author of Adventures on the Wine Route

Michael Steinberger is Slate's longtime wine columnist and a contributing writer for the "Financial Times. "His work has also appeared in the" New Yorker, "the" New York Times "magazine," NYT Book Review, "the" Economist, Food & Wine, "and" Saveur, " among many other publications. Previously, he worked as a foreign correspondent in Hong Kong, covering the city's transition to Chinese rule, and he has written extensively about economics, finance, culture, sports, and politics for a variety of leading international media. He is married with two children.
Loading...
or
Not Currently Available for Direct Purchase