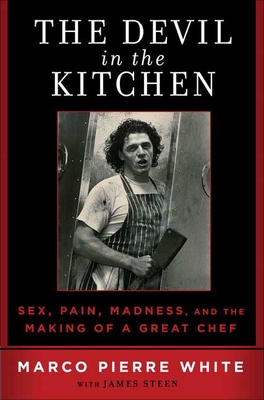 The Devil in the Kitchen

Sex, Pain, Madness and the Making of a Great Chef

What do Mario Batali, Heston Blumenthal, and Gordon Ramsay have in common? Answer: They all survived tours of duty in the kitchen of Marco Pierre White. In the UK, White's brilliant cooking and high-wattage antics have made him a legend: the first British chef (and the youngest chef anywhere) to win three Michelin stars, a chain-smoking, pot-throwing, multiply married culinary genius whose fierce devotion to food and restaurants has been the only constant in a life of tabloid-ready turmoil. In The Devil in the Kitchen, he tells the story of his life in food, spanning his apprenticeship with Albert and Michel Roux, his wild years in the bacchanal of 1980s Chelsea, his ferocious pursuit of the highest Michelin rating, and his retirement career as a hugely successful restaurateur. With cameos from the likes of Michael Caine, Madonna, and Damien Hirst, The Devil in the Kitchen leaves no dish unserved, relating the backroom antics, the blood feuds, and the passion for great food that have driven London's greatest restaurants for decades.

Marco Pierre White is the most decorated chef in English history and the youngest chef ever to win three Michelin stars. His London restaurant empire includes Belvedsere, Criterion, Drones, L'Escargot, Mirabelle, Quo Vadis, and the Frankies chain of pizzerias.
Loading...
or
Not Currently Available for Direct Purchase