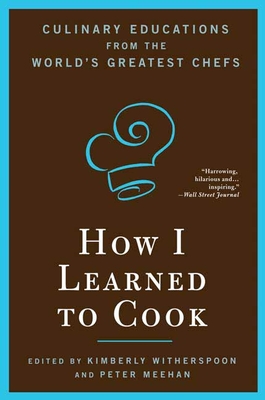 How I Learned To Cook

In this indispensable companion to the smash hit Don't Try This at Home, forty great chefs, including Mario Batali, Eric Ripert, and Fergus Henderson, share pivotal moments of their culinary educations.

Before he was a top chef, Tom Colicchio learned to love cooking while he slung burgers at a poolside snack bar. Barbara Lynch tells the story of lying her way into her first chef's job and then needing to cook her way out of trouble in the galley kitchen of a ship at sea. Stories of mentorship abound: Rick Bayless tells the story of finally working with Julia Child, his childhood hero; Gary Danko of earning the trust of the legendary Madeleine Kamman. How I Learned to Cook is an irresistible treat, a must-have for anyone who loves food and wants a look into the lives the men and women who masterfully prepare it.

Praise For How I Learned To Cook: Culinary Educations from the World's Greatest Chefs…

"Harrowing, hilarious and…inspiring."--Wall Street Journal
"How I Learned to Cook reassures us that the path to culinary fame is sometimes paved with kitchen fires, exploding fava beans, and unecstatic cherries jubilee."--Vogue
"A collection of savvy, savory essays by 40 of the world's best chefs and food writers…who share their early triumphs, travails, and innovations as up-and-comers before they ascended to culinary stardom."--Elle
"Entertaining and inspiring."--Chicago Sun-Times

Kimberly Witherspoon is a founding partner at Inkwell Management, a literary agency based in Manhattan, and is the coeditor of Don't Try This at Home: Culinary Castastrophes from the World's Greatest Chefs. She lives with her family in North Salem, New York. Peter Meehan writes about food and drink. He contributes regularly to the New York Times.
Loading...
or
Not Currently Available for Direct Purchase