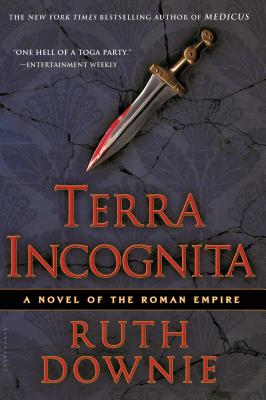 A Novel of the Roman Empire (The Medicus Series #2)

It is spring in the year of 118, and Hadrian has been Emperor of Rome for less than a year. After getting involved with the murders of local prostitutes in the town of Deva, Doctor Gaius Petreius Ruso needs to get out of town, so has volunteered for a posting with the Army on the volatile border where the Roman-controlled half of Britannia meets the independent tribes of the North. Not only is he going to the hinterlands of the hinterlands, but it his slave Tilla's homeland and she has some scores to settle there. Soon they find that Tilla's tribespeople are being encouraged to rebel against Roman control by a mysterious leader known as the Stag Man, and her former lover is implicated in the grisly murder of a soldier. Ruso, unwillingly involved in the investigation of the murder, is appalled to find that Tilla is still spending time with the lover. Worse, he is honour bound to try to prove the man innocent - and the Army wrong - by finding another suspect. Soon both Ruso's and Tilla's lives are in jeopardy, as is the future of their burgeoning romantic relationship.

In 2004, Ruth Downie won the Fay Weldon section of BBC3’s End of Story competition; Medicus is her first novel. She is married with two sons and lives in Milton Keynes, England.

Ruso is “thanked by nobody,” according to the list that opens the novel (v). Why is Ruso unappreciated at the end of the novel? Has he earned this thanklessness? Why or why not?

What is the significance of Tilla’s gift to Ruso at the beginning of the novel? What conflicts arise from this gift? Does Ruso seem to understand Tilla’s reasons for giving him money?

What are some attitudes toward the medical profession among the characters of Terra Incognita?  Who seems to have the least faith in Roman medicine: legionaries, Batavians, or local tribes?

What did Ruso expect to see at the edge of the Roman Empire? Why does he feel “a faint slump of disappointment” when he views the border (58)? Does the border meet any of Ruso’s expectations? Why or why not?

When he first volunteers to conduct a postmortem report on Felix’s body, Ruso thinks confidently, “he was beginning to get the hang of this politics business.” (65). When does Ruso’s inability to juggle medicine and politics become apparent? What political skills does he lack? What are his professional strengths?

Discuss the character of Thessalus. What are the doctor’s complex motives for confessing to Felix’s murder? Is his deception justified? Why or why not?

Aemilia says of Ruso, “And he is rather good-looking, in a cross sort of way.” (283). Imagine and describe Ruso’s physical appearance, based on Aemilia’s comment and his character traits.

Describe “Catavignus’s vision” of prosperity for Coria (377). What stands in the way of that vision? Which of Catavignus’s actions seem motivated by personal gain, and which by his concern for the future of his family and community?

Ruso never finds out if Metellus and Catavignus were working together to “help clear up undesirables” in Coria (370). Why does this question remain unresolved in the novel? Does it seem likely that the two men collaborated? Why or why not?

Tilla says to Ruso at the end of the novel, “But I do not want to marry you because you are foreign and you do not trust me.” (382). Under what circumstances could Ruso and Tilla ever marry? What might their marriage be like? Do you think it ever happen in this series? Why or why not?

The events of Terra Incognita take place over the span of a single week. How does Downie pack so much action into such a short period of time? Which day of Ruso and Tilla’s adventures feels the most eventful?

Terra Incognita means “unknown land” in Latin. What remains “unknown” by Ruso about Britannia? In what ways is the expanding Roman Empire a “terra incognita” for Tilla?

Tilla says of Ruso, “ ‘The family would have learned to like him.’ Perhaps.” (251). Is it likely that Tilla’s family would have accepted her relationship with Ruso? How do you think Ruso’s family will react when they meet Tilla in the next book in the series, Persona Non Grata?