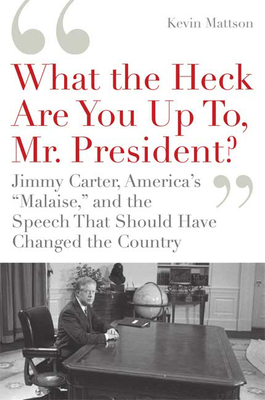 'What the Heck Are You Up To, Mr. President?'

Jimmy Carter, America's "Malaise," and the Speech that Should Have Changed the Country

In 1979, in an effort to right our national malaise, Jimmy Carter delivered a speech that risked his reputation and the future of the Democratic Party, changing the course of American politics for the next twenty-five years.

At a critical moment in Jimmy Carter's presidency, he gave a speech that should have changed the country. Instead it led to his downfall and ushered in the rise of the conservative movement in America. In "What the Heck Are You Up To, Mr. President?" Kevin Mattson gives us a behind-the-scenes look at the weeks leading up to Carter's "malaise" speech, a period of great upheaval in the United States: the energy crisis had resulted in mile-long gas lines, inciting suburban riots and violence; the country's morale was low and Carter's ratings were even lower. The administration, wracked by its own crises, was in constant turmoil and conflict. What came of their great internal struggle, which Mattson conveys with the excitement of a political thriller, was a speech that deserves a place alongside L incoln's Gettysburg Address or FDR's First Inaugural. Prominent politicians on both sides of the aisle play important roles, including Carter, Vice President Walter Mondale, speechwriter Hendrik Hertzberg, Ronald Reagan, and Ted Kennedy. Like the best of narrative political writing, Mattson provides great insight into the workings of the Carter White House and the moral crisis that ushered in a new, conservative America.


Praise For 'What the Heck Are You Up To, Mr. President?': Jimmy Carter, America's "Malaise," and the Speech that Should Have Changed the Country…

“Excellent... a cautionary tale and a great read... Those of us who were around back in the day will be ruefully reminded of those bygone times. And those who weren't will be scratching their heads in disbelief at this fascinating and frequently improbable history.” —Wall Street Journal

“That Mr. Carter felt he had to deliver such a risky speech says a great deal about the political fix he was in at the time. It says plenty, too, about where the wobbling American psyche stood during the weird, unnerving summer of 1979... In his new book, "What the Heck Are You Up To, Mr. President?", Kevin Mattson... lays out the events of that summer like a big, rolling banquet... the historical ingredients are fascinating and first-rate…Mr. Mattson writes well about Mr. Carter's staff and the intense jockeying that led up to the malaise speech.” —Dwight Garner, New York Times

“[A] detailed unpacking of the speech and the tumultuous events that inspired it.” —LA Times

“Despite a brief bump in the president's approval ratings, the address became forever disparaged as the "malaise" speech, and it doomed Carter's reelection chances. That speech, history has concluded, was a huge mistake. Ohio University historian Kevin Mattson challenges that conclusion in his feisty new book…Chronicling the mood inside the White House and across the nation in the months surrounding the speech -- months when gas lines and Three Mile Island monopolized the news while "The Deer Hunter" and "disco sucks!" dominated the zeitgeist -- Mattson offers a radically different reading.” —Carlos Lozada, Washington Post

“[In] the summer of 1979, the country seemed to be imploding in the face of a gas crisis, resulting in long lines at the pump, trucker strikes and violence. The nation's confidence plummeted and calls for "inspirational and innovative leadership" remained unheeded. Starting on July 4, Carter holed up at Camp David for ten days, emerging with a legendary address... that would both galvanize and deeply cleave the country. Mattson... sifts through the varied media coverage of the event to isolate this crucial moment in America's recognition of itself... A galloping history full of interesting characters and significant moments.” —Kirkus

“This book becomes a page-turner for those interested in the decadent disco decade, Jimmy Carter himself, and the modern presidency.” —Library Journal

“In ‘What the Heck Are You Up To, Mr. President?' Kevin Mattson revisits Jimmy Carter's speech delivered to a national audience on July 15, 1979. That address came to be known as the ‘malaise' speech, though Carter never used the word. The President did mention ‘paralysis and stagnation and drift,' but he also spoke of ‘strength' and ‘a rebirth of the American spirit.' Mattson offers a deep reading of the speech, placing it in the cultural and political contexts of the late 1970s. The result is an eye-opening inquiry into the power of words at a pivotal moment in history.” —Louis P. Masur, author of The Soiling of Old Glory

“Boldly and with great style, Kevin Mattson captures the political, social, and cultural events that shaped Jimmy Carter's ‘Malaise' speech of July 15 1979. He reveals how events abroad and at home--in the White House, at gas stations, on TV, and in learned books--shaped an opportunity to confront the energy problem, which the nation avoided at its own peril.” —Daniel Horowitz, professor of American Studies at Smith College and author of The Anxieties of Affluence

Kevin Mattson is the Connor S tudy Professor of Contemporary History at Ohio University. He's the author of Rebels All!, When America Was Great, Upton Sinclair and the Other American Century, and Intellectuals in Action. He writes for the American Prospect, Dissent, the Nation, the New York Times Book Review, the Washington Post Book World, and many others.