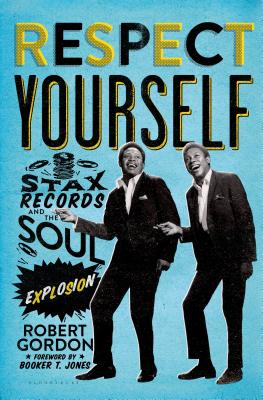 Stax Records and the Soul Explosion

The story of Stax Records unfolds like a Greek tragedy. A white brother and sister build a record company that becomes a monument to racial harmony in 1960's segregated south Memphis. Their success is startling, and Stax soon defines an international sound. Then, after losses both business and personal, the siblings part, and the brother allies with a visionary African-American partner. Under integrated leadership, Stax explodes as a national player until, Icarus-like, they fall from great heights to a tragic demise. Everything is lost, and the sanctuary that flourished is ripped from the ground. A generation later, Stax is rebuilt brick by brick to once again bring music and opportunity to the people of Memphis.

Set in the world of 1960s and '70s soul music, Respect Yourself is a story of epic heroes in a shady industry. It's about music and musicians -- Isaac Hayes, Otis Redding, Sam and Dave, Wilson Pickett, the Staple Singers, and Booker T. and the M.G.'s, Stax's interracial house band. It's about a small independent company's struggle to survive in a business world of burgeoning conglomerates. And always at the center of the story is Memphis, Tennessee, an explosive city struggling through heated, divisive years.

Told by one of our leading music chroniclers, Respect Yourself brings to life this treasured cultural institution and the city that created it.

Robert Gordon is Professor of Theatre and Performance at Goldsmiths, University of London, UK, and Director of the Pinter Research Centre in Performance and Creative Writing. His research has focused on modern British theatre, the theory and practice of performance and on musical theatre He has published books on Stoppard and Harold Pinter, on modern acting theories and edited The Oxford Handbook of Sondheim Studies and is co-editor of The Oxford Handbook of the British Musical.

Praise For Respect Yourself: Stax Records and the Soul Explosion…

“A masterful storyteller, music historian Gordon artfully chronicles the rise and fall of one of America's greatest music studios, situating the story of Stax within the cultural history of the 1960s in the South…Gordon deftly narrates the stories of the many musicians who called Stax home." - Publishers Weekly, starred review "[Gordon] chronicles the exciting rise and ugly fall of his hometown music giant with a historian's rigor, a journalist's persistence, a filmmaker's scope and a musician's swing... Respect Yourself is a prototypical American bootstrap story of poverty, race, money and greed. But it is also a story of 'shifting the paradigm, breaking the covenant, pursuing the dream....'" - Shelf Awareness "[Stax] wasn't just a record label, but the headquarters of a creative movement: the place where an integrated (in multiple senses) cluster of artists and businesspeople created a new kind of popular music, sold it to the world, and tried to unite their divided community by example... A compelling story, and Robert Gordon's well placed to tell it.” —Douglas Wolk, Bookforum

“[Respect Yourself is] wonderful cultural history of not only a record company but also the city of Memphis itself. But it is also the story of America writ large: of racism and segregation, of civil rights and riots in the street, of President Lyndon Johnson and Dr. Martin Luther King, Jr. . . . Gordon tells the Stax story-- from its humble beginnings to its heyday, to its bankruptcy, and to its present-day incarnation as the Stax Museum of American Soul Music -- with expertise, feeling, and a sure hand” —Booklist, starred review

“A spellbinding history of one of the most prolific hit-making independent record companies in the history of American music . . . In zesty prose, Gordon ably narrates this whole story, ending with the convoluted financial machinations that led to the label's stunningly rapid collapse. Deep cultural and social history enlivened by a cast of colorful characters.” —Kirkus Reviews, starred review