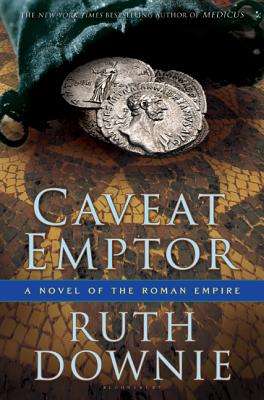 In her fourth novel, Ruth Downie brings to life the corruption and treachery of Roman-occupied Britain, as it closes in on her winsome leading man, Gaius Petreius Ruso.

Ruso and Tilla, now newlyweds, have moved back to Britannia, where Ruso's old friend and colleague Valens has promised to help him find work. But it isn't the kind of work he'd had in mind-Ruso is tasked with hunting down a missing tax man named Julius Asper. Of course, there's also something else missing: money. And the council of the town of Verulamium is bickering over what's become of it. Compelled to delve deeper by a threat from his old sparring partner, Metellus, Ruso discovers that the good townsfolk may not be as loyal to Rome as they like to appear. While Tilla tries to comfort Asper's wife, an anonymous well-wisher is busy warning the couple to get away from the case before they get hurt. Despite our hero's best efforts to get himself fired as investigator, he and his bride find themselves trapped at the heart of an increasingly treacherous conspiracy involving theft, forgery, buried treasure, and the legacy of Boudica, the Rebel Queen. Ruth Downie the author of the New York Times bestselling Medicus, Terra Incognita, and most recently Persona Non Grata. A part-time librarian, she is married with two sons and lives in Milton Keynes, England.

"Downie remains a peerless storyteller and a master entertainer. BBC’s Masterpiece should take a long look at this series. It’s a winner."—Kirkus Reviews "Supurb … Downie excels in bringing the ancient world to life as well as making the attitudes and customs of its inhabitants accessible to a modern audience."—Publishers Weekly (starred review)

Ruth Downie is the author of the New York Times bestselling Medicus, Terra Incognita, and most recently Persona Non Grata. She is married with two sons and lives in Milton Keynes, England.

Caveat Emptor opens with a quotation from the Roman Tacitus about the Britons: “So, fighting separately, all are conquered.” What does this quotation tell us about the Romans’ attitude toward the Britons? How does it set the stage for what’s to come?

The cast of characters at the beginning of the novel lists who Ruso will be “employed by, perplexed by, lied to by, set straight by,” and more. What does this list tell us about Ruso’s character? What other trials, deceits, and challenges does Ruso endure by the end of Caveat Emptor?

Discuss Tilla and Ruso’s difficulty having children. How does Ruso feel about settling down and starting a family with Tilla? Why does Tilla keep her past pregnancy secret from Ruso? What are the effects of this secret on their relationship, and why does Tilla finally reveal it?

What is the Catuvellauni tribe like, according to the Romans? What do other Britons, including northerners like Tilla, think of the Catuvellauni? Who has a clearer idea of this tribe’s motivations: the Romans or the Britons?

Discuss Metellus’s role in the investigation of Julius Asper’s disappearance. Why is Ruso so dismayed to find that Metellus is involved in the case? How does Metellus stand in the way of Ruso’s investigation, and how does he help it?

Ruso and Tilla have very different experiences when they first arrive in Verulamium. Compare the two scenes of arrival and discuss why the town greets Ruso and Tilla differently. What are Ruso’s first impressions of the town, and what are Tilla’s? How does each of them feel about Verulamium by the end of the novel?

Many of the men in Caveat Emptor are experiencing marital problems. How do Ruso, Valens, and Caratius each deal with conflicts with their wives? How do the wives—Tilla, Serena, and Camma—feel about their husbands?

Albanus, Ruso’s former clerk, is determined to help Ruso with his investigation. What kind of sidekick is Albanus? When is he helpful to Ruso, and when does he seem more of a nuisance than an assistant?

Consider the events of Julius Asper’s funeral. What controversial role does Tilla play in this scene? How does this funeral serve as a turning point in the plot of Caveat Emptor? How is Tilla treated differently in Verulamium after the funeral?

When Grata, Julius Bericus’s housekeeper, wants to see her employer’s corpse, the two sides of Ruso, doctor and investigator, come into conflict: “The doctor in him told the investigator he should have stopped her.” (191) Why does Ruso’s job as an investigator take priority over his principles as a doctor?

There are several cases of forgery in Caveat Emptor: Dias and Gallonius’s coin conspiracy, the forged coins that Metellus caught Tilla spending, and Tilla’s forged letter that brings Valens and Serena back together. What are the consequences of each forgery? Which crime is more ethical: Dias forging coins to pay his guards a fair wage or Tilla using fake coins and fake letters? Explain your answer.

Discuss the uncertainty surrounding Camma’s death. Who probably killed Camma: Dias or Caratius’s senile mother? What evidence is there for each side? Why does Tilla blame herself for Camma’s death?

At the end of the case, Ruso says that investigating is “nothing but lies and deceit and making people even more miserable than they are already.” (326) What are the high and low points of Ruso’s investigation? Why is Ruso so frustrated at the end of this case? Do you think he would ever serve as an investigator again? Why or why not?

What is the legacy of Boudica, the rebel queen of the Iceni? How do Romans remember Boudica, and how do the Catuvellauni remember her? How does the marriage between Camma and Caratius help to heal the conflict between the Iceni and the Catuvellauni, and how does this peace effort fail? Why do the Iceni insist that Camma’s baby must be raised with them, with or without Tilla’s care?

Caveat Emptor mixes mystery, adventure, romance, and humor. What are the funniest scenes of the novel? Which scene is the most action-packed?