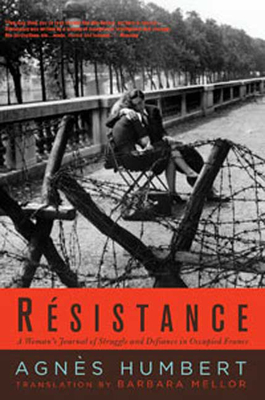 A Woman's Journal of Struggle and Defiance in Occupied France

“Nothing comes close to capturing the immediacy and the horror of the German occupation of France during WWII than this memoir of the French Resistance from Agnes Humbert, a woman of amazing strength, conviction, and, yes, humor. This extraordinary book (available now in an excellenct translation) brings to light a period of history which still has much to teach us today.”
— Susan Townley, Viva! Bookstore, San Antonio, TX
View the List

"You may think you've read stories like this before, yet hers is special "Resistance "was written by a woman of exceptional intelligence and courage. Her perceptions are acute, honest and humane." "Newsday "
""
""Agnes Humbert was an art historian in Paris during the German occupation in 1940. Stirred to action by the atrocities she witnessed, she joined forces with several colleagues to form an organized resistance very likely the first such group to fight back against the occupation. (In fact, their newsletter, "Resistance," gave the French Resistance its name.)

In the throes of their struggle for freedom, the members of Humbert's group were betrayed to the Gestapo; Humbert herself was imprisoned. I n immediate, electrifying detail, Humbert describes her resistance against the Nazis, her time in prison, and the horrors she endured in a string of German labor camps, always retaining in spite of everything hope for herself, for her friends, and for humanity. Originally published in France in 1946, the book is now translated into English for the first time.

Agnes Humbert was a distinguished art historian and a member of the Musee de l'Homme group in the French Resistance. She survived the war and died in Valmondois, France, in 1963. Barbara Mellor is a translator specializing in the fine and decorative arts, art history, architectural history, fashion, design, and all things French. During her research into a Resistance ambush of a German armored column in Aveyron, she stumbled across the 1946 edition of Resistance.

Praise For Résistance: A Woman's Journal of Struggle and Defiance in Occupied France…

“Thrilling…More than 60 years after it was first published, Humbert’s book…has finally been translated into English. I t was worth the wait: Barbara Mellor not only captures Humbert's reckless spirit but also her very Parisian sense of humor, at turns mordant and sarcastic.”—Washington Post