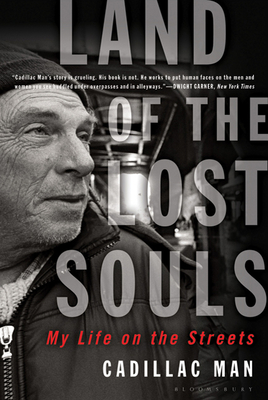 Land of the Lost Souls

My Life on the Streets

Cadillac Man's story is grueling. His book is not. He works to put human faces on the men and women you see huddled under overpasses and in alleyways, and there are cracks of light in the tale he tells, even moments of joy, bravery and suspense.--Dwight Garner, New York Times

A moving, funny, and unforgettable memoir of homeless life in New York City, Land of the Lost Souls spans Cadillac Man's sixteen years on the streets. Over those years, he recorded his daily life, writing hundreds of thousands of words in a succession of spiral-bound notebooks. In his gritty and poignant voice, Cadillac narrates his descent into homelessness, the struggles and surprises of his life, and the story of his love affair with a young runaway. The United States has a homeless population of close to seven hundred thousand: Cadillac's stories are their stories, but his voice is all his own.

Born in the Hell's Kitchen area of Manhattan, Cadillac Man has lived on the streets in four of New York City's five boroughs. His writing has also appeared in the New York Times and Esquire magazine.
Loading...
or
Not Currently Available for Direct Purchase