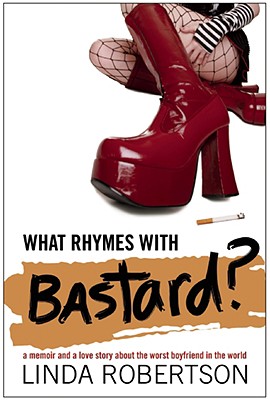 What Rhymes with Bastard?

A hilariously candid story of a dysfunctional and disintegrating relationship, What Rhymes with Bastard? follows Linda Robertson as she moves from London to San Francisco, where she gets cheated on, gets dumped, loses her job, and forms a cabaret band.

Linda’s story begins in London. When her beloved Jack gets locked up in a mental hospital after trying to sail down the Thames in a makeshift raft, Linda doesn’t take the hint. Instead, she marries him and moves to San Francisco, where she plans to Get Ahead.

Alas, her blue-skied visions didn’t include unemployment, oddball roommates, arguments, or Jack's desperate attempt to sleep with as many women as he can get his hands on. As her romance sours, our heroine pours her bile into song, assembles a cabaret band, and takes to the dark, sticky stages of the city's nightclubs. There, amid a morass of strippers, magicians, artists and assorted weirdoes, she strives for the ultimate musical accolade: Ms Accordion San Francisco 2004.

Praise For What Rhymes with Bastard?…

“(Robertson) displays a deft touch when it comes to capturing the pathos of a sick relationship...she is painfully frank, but also funny...if writing well is the best revenge, she has settled a score." – NY Times

“This chick is dangerously crazy…intervention-worthy.” – Heather A. Buettner

"Just when you think a memoir can't get much more personal, along comes this - a brilliant, sometimes disgustingly vivid account of the breakdown of a marriage and the building of a new life...compelling and original, in form as well as style." – UK Daily Telegraph