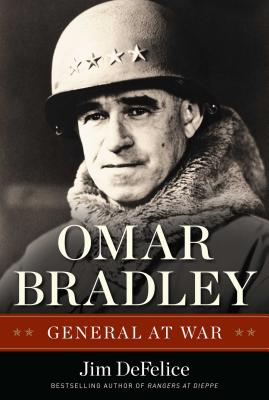 The First In-Depth Biography of America's Last Five-Star General He was known as "the G.I. General"-- humble, self-effacing, hard-working, reflecting the small-town virtues of the America whose uniform he wore. But those very virtues have led historians to neglect General Omar Bradley--until now. Bestselling author Jim DeFelice, in this, the first-ever in-depth biography of America's last five-star general, tells Bradley's full story, and argues that the neglected G.I. General did more than any other to defeat Hitler in World War II. While General George S. Patton has garnered much of the glory, General Dwight David Eisenhower has claimed much of the world's respect, and British General Bernard Montgomery has kept the Union Jack flying, as DeFelice proves, it was the unassuming Bradley who actually developed the strategy and the tactics that won the war in Europe. Meticulously researched, using previously untapped documents and unpublished diaries and notes, Omar Bradley: General at War reveals:
Provocative, thorough, original, Jim DeFelice's Omar Bradley: General at War deserves a place on the shelf of every reader of World War II history.

In Omar Bradley: General at War, Jim DeFelice brings a war hero to life. Through the pages of this fast-paced and thoroughly researched story, the crack shot from Middle America emerges as an intellectual force behind some of America’s greatest victoriesand a man who held his own against titans like Eisenhower, Patton, and Montgomery. From the deserts of Tunisia to the blood-stained snows of Bastogne, DeFelice’s saga of war, heroism, and humility gives America’s last five-star general a literary monument he never had in life. Omar Bradley: General at War is a truly remarkable book you’ll enjoy for its skillful writing as well as its historical credibility. Highly recommended!”
Jonathan W. Jordan, bestselling author of Brothers, Rivals, Victors: Eisenhower, Patton, Bradley and the Partnership that Drove the Allied Conquest in Europe

Jim DeFelice has written an entertaining and readable account of a great leader’s life, showing what shaped his character and how he faced some of the greatest military challenges of the twentieth century. Military buffs will be pleased. Anyone who reads it will be enriched.”
Larry Bond, author of New York Times bestseller, Cold Choices

People are familiar with the Omar Bradley of film and history books that depict him as a sidekick to more celebrated American generalsbut they do not know anything close to the truth about him. In this vital, triumphant work, Jim DeFelice at long last dispels all the misconceptions with the definitive story of this towering U.S. military figure. And he does it with the masterful style of a veteran writer.”
Jerome Preisler, New York Times bestselling author of All Hands Down: The True Story of the Soviet Attack on the USS Scorpion and the forthcoming Codename Caesar, an exploration of German-Japanese cooperation during World War II

General Bradley was a mid-American to the core with those values being illustrated throughout his life. This is an enjoyable read for followers of military history, students of leadership skills, and good old human interest’ fans. . . . A quick read and a big help in understanding the major players and strategies of the European campaigns during WWII.”
Richard Marcinko, ROGUE WARRIOR, aka Richard Marcinko CDR, USN (Ret.)