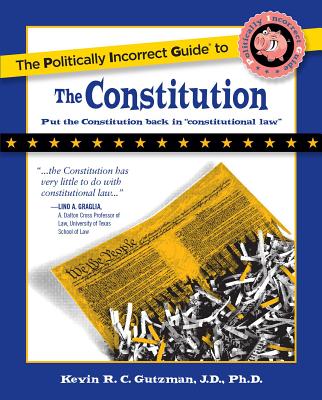 The Constitution of the United States created a representative republic marked by federalism and the separation of powers. Yet numerous federal judges--led by the Supreme Court--have used the Constitution as a blank check to substitute their own views on hot-button issues such as abortion, capital punishment, and samesex marriage for perfectly constitutional laws enacted by We the People through our elected representatives.

Now, The Politically Incorrect Guide to the Constitution shows that there is very little relationship between the Constitution as ratified by the thirteen original states more than two centuries ago and the "constitutional law" imposed upon us since then. Instead of the system of state-level decision makers and elected officials the Constitution was intended to create, judges have given us a highly centralized system in which bureaucrats and appointed--not elected--officials make most of the important policies.

Kevin R. C. Gutzman, J.D., Ph.D. is associate professor of American history at Western Conneticut State University. He received his Master of Public Affairs from the University of Texas, his J.D. from the University of Texas School of Law, and his M.A. and Ph.D. in American history from the Univeristy of Virginia. Dr. Gutzman is the author of Virginia's American Revolution: From Dominion to Republic, 1776-1840 and was a featured expert in the documentary film John Marshall: Citizen, Statesman, and Jurist. He has written scores of articles and encyclopedia entries, as well as reviews of books, films, and exhibitions for magazines academic and popular. He lives in Bethel, Connecticut, with his three children.
Loading...
or
Not Currently Available for Direct Purchase