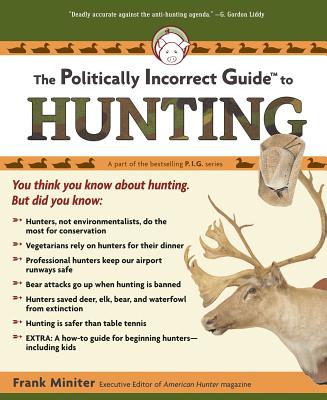 Why the Left's anti-hunting propaganda is dead wrong!
Nothing is more hated--and more misunderstood--by the trendy Left than hunting. But now intrepid hunter and pro-hunting activist Frank Miniter sets the record straight. In The Politically Incorrect Guide(tm) to Hunting, he details the concrete benefits that hunting provides to all of us--even how it helps the environment. Speaking with wildlife biologists, hunters, farmers, anti-hunters, and victims of animal attacks, Miniter explains how banning hunting negatively affects wildlife populations and conservation. Miniter's fearless, politically incorrect take on hunting lays out the facts that liberal enviro-nuts don't want you to know, including:

*How a well-intentioned policy of "live and let live" with Florida alligators resulted in human deaths
*Why you're more likely to be attacked by a bear in an area where hunting is forbidden, such as a national park
*Why non-lethal alternatives to hunting don't work to control animal populations
*Why even vegetarians depend on hunting for their dinner (especially those who demand organic or locally grown food)
*How hunters are wildlife's best defenders--far more effective than big-budget "green" groups
*How deer cause more human deaths each year than sharks, cougars, bears, and alligators combined
*Why hunting is statistically safer for kids than football, bicycling, and tennis

If you love hunting, you need to arm yourself with The Politically Incorrect Guide(tm) to Hunting, so that the next time you encounter an anti-hunter, you'll be equipped to shoot down politically correct myths and defend this great American sport against all attacks.

Frank Miniter has floated the Amazon, run with the bulls of Pamplona, hunted everything from bear in Russia to elk with the Apache to kudu in the Kalahari, and he has fly-fished everywhere from Alaska’s Kenai to Scotland’s River Spey to Japan’s freestone streams. Along the way he was taught to box by Floyd Patterson, spelunked into Pompey’s Cave, climbed everywhere from New York’s Gunks to the Rockies, and studied Kenkojuku Karate with Sensei Masakazu Takahashi. He graduated from the oldest private military academy in the United States, a place that still teaches honor and old-school gentlemanly conduct. He believes that American men need this book because too many have forgotten—or never been taught—the gentleman’s code of honor.

He is the author of several books, including the bestselling Ultimate Man’s Survival Guide and The Politically Incorrect Guide to Hunting, has won numerous awards for his outdoors and conservation writing, and has contributed articles to Forbes, National Review, The Washington Times, The Washington Examiner, Foxnews.com, and many other outlets. He was a senior editor at Outdoor Life magazine and an executive editor at American Hunter magazine. Currently, he is editor in chief of the NRA’s political magazine, America’s 1st Freedom.
Loading...
or support indie stores by buying on