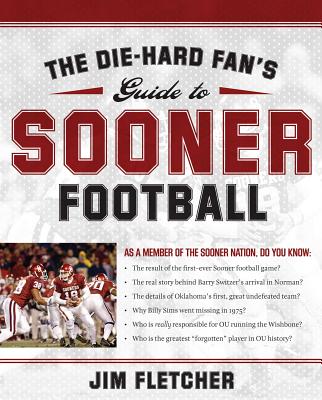 A Tribute to the Sooner Nation
Sooner fans, this is the one you've been waiting for--a book written by a die-hard fan, for die-hard fans. Chock-full of action photos, these pages capture the excitement and the glory of a century of Sooner football.

The Die-Hard Fan's Guide to Sooner Football takes you on a tour through the long, proud history of the OU football program, from the birth of Sooner football in Bud Risinger's barber shop, through the dynasties of Bud Wilkinson and Barry Switzer, to Bob Stoops's powerhouse teams of today.

You will come face to face with Heisman winners Billy Sims, Billy Vessels, Steve Owens, and Jason White. Additionally, you'll become acquainted with some of the great forgotten players throughout the team's history players who made crucial contributions to excellent Sooner teams, but somehow never earned the recognition they deserve. Read through exclusive interviews conducted with some of the biggest Sooner legends: Lucious Selmon, Darrell Royal, Steve Davis, Joe Washington, Bob Stoops, Jimmy Harris, Billy Sims, Jack Mildren, and the King himself, Barry Switzer. All contribute their thoughts and memories about their time in the limelight at Owen Field.

But of course, Sooner football is not just about the players and the coaches; it's about the fans. Here, you will find reminiscences about the good times at OU from a motley collection of die-hard Sooner devotees.

You'll meet Bill Horn, who bluffed his way onto the Sooner sideline and became the "unofficial team photographer," as well as Bryan Procter, who expressed his dedication to the team by wearing the same pair of "lucky" underpants to every Sooner game for seven years.

A passionate tribute to the winningest college football program of the last sixty years, The Die-Hard Fan's Guide to Sooner Football will rekindle your pride in the Sooner Nation.

Jim Fletcher is an author, speaker, and activist, specializing in Bible prophecy, Christian apologetics, and support for Israel. He is a member of the executive committee for the National Christian Leadership Conference for Israel (NCLCI), director of Prophecy Matters, and he blogs weekly for WorldNetDaily ("Writer's Bloc"); Beliefnet ("Is it the End of the World?"); and RaptureReady ("Israel Watch"). He lives with his family in the beautiful Ozark Mountains of Arkansas.
Loading...
or
Not Currently Available for Direct Purchase