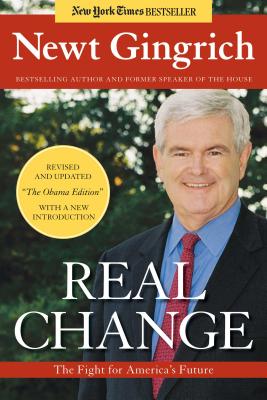 The Fight for America's Future

Americans don’t just want change this election year, they want real change—but most have no idea where it will come from. Democrats can’t provide it and Republicans won’t. But former Speaker of the House Newt Gingrich does. He explains what is wrong with our country and how to solve our problems in his blockbuster new book, Real Change: From the World That Fails to the World That Works.

In this no-holds-barred assessment of American politics, Gingrich approaches our nation’s problems with a private-sector mentality and an entrepreneurial spirit, offering commonsense solutions for the issues of today and the challenges of tomorrow.

He lambasts both parties for creating a “government of the bureaucrats, by the consultants, and for the special interests” and busts the myth that voters are entrenched in a “red state” vs. “blue state” mentality. Gingrich exposes the truth: Americans are united on almost every important issue. It’s the politicians who drag us into partisan bickering and away from real change.