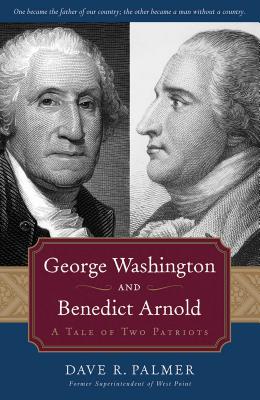 A Tale of Two Patriots

From 1775 through 1777, George Washington and Benedict Arnold were America’s two most celebrated warriors. Their earlier lives had surprisingly parallel paths. They were strong leaders in combat, they admired and respected each other, and they even shared common enemies. Yet one became our greatest hero and the other our most notorious traitor. Why?
In the new paperback edition of George Washington and Benedict Arnold: A Tale of Two Patriots, author and military historian Dave Palmer reveals the answer: character. In this fascinating and unique dual biography, Palmer also shows:
How Arnold’s treason actually helped the Patriot cause
Why Arnold and Washington’s amazingly similar backgrounds, family influences, youthful experiences, and “self–made” status led to strikingly different results in their lives
How in four well–defined steps Arnold went from hero to traitor
Presenting the panorama of the Revolutionary War through the lives of two of its most colorful and important figures, George Washington and Benedict Arnold reveals important lessons for today through a story that few Americans know, but that every American should.

Dave Richard Palmer is a retired United States Army Lieutenant General, former Superintendent of the West Point (1986–1991), military historian and author, and former President of Walden University. A 1956 graduate of West Point, he served two tours in the Vietnam War and numerous command positions during the height of the Cold War.
Loading...
or
Not Currently Available for Direct Purchase