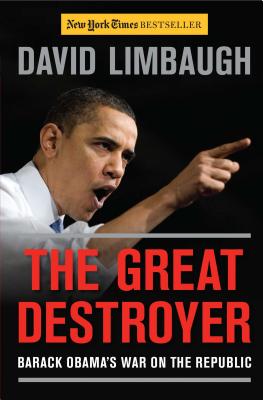 Barack Obama's War on the Republic

Obama has been a one-man wrecking ball

When it comes to our prosperity, our freedom tradition, and our constitutional government, President Barack Obama has been the great destroyer—knocking down the free-market economy and principles of limited government that have made America the envy of the world.

As New York Times bestselling author David Limbaugh documents in chilling detail in his new book, The Great Destroyer, the Obama administration has waged a relentless, nearly four-year-long war to transform our nation into a country where federal bureaucrats have more power over our lives than we do; where leftist crony capitalism dependent on government subsidies is replacing the real thing; where, in an Orwellian inversion of meaning, a savagely weakened national defense somehow makes us stronger and trillions in deficit spending on counterproductive government “stimulus” and welfare programs somehow makes us richer.

Limbaugh unveils the reality behind the administration’s rhetoric. In The Great Destroyer you’ll learn:

In irrefutable detail, David Limbaugh, like a prosecuting attorney, makes his case that the Obama administration is a real and present danger to America’s future. There is no more comprehensive indictment of the Obama administration as it seeks re-election than The Great Destroyer. It is a book that every American worried about the future of our country must read.

David Limbaugh is a lawyer, nationally syndicated columnist, political commentator, and the author of ten bestsellers, including Jesus on Trial, The Emmaus Code, The True Jesus, and Jesus is Risen. The brother of radio host Rush Limbaugh, he lives in Cape Girardeau, Missouri, with his wife and children. Follow him on Twitter: @DavidLimbaugh.
Loading...
or
Not Currently Available for Direct Purchase