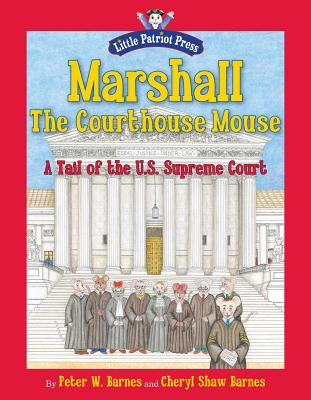 A Tail of the U. S. Supreme Court

Should mice be able to eat any cheese they please? That’s the question in front of Chief Justice Marshall J. Mouse and his mice justices in Marshall, the Courthouse Mouse. Written and illustrated by the award winning and bestselling writer/illustrator team Peter and Cheryl Barnes, Marshall, the Courthouse Mouse follows the United Mice of America’s Supreme Court as Chief Justice Marshall and his fellow mice justices debate the constitutionality of a sacred mouse law. Children will be educated and entertained as they learn about everything from petitioning the high court to handing down decisions to the laws of the land. With a “find the turtle” activity throughout the book and a resource section for teachers and parents at the end, Marshall, the Courthouse Mouse, delights and amuses kids as they learn about the Constitution, court opinions, and our nation’s laws.

Peter and Cheryl Barnes are a husband and wife writing/illustrating team who specialize in educational books for children. They are creators of the bestselling Woodrow, the White House Mouse, and their books have been featured on numerous top-tier TV and radio shows including The Today Show, C-Span’s Book TV and National Public Radio, and in prominent print outlets such as the New York Times, Washington Post and Child Magazine. Their other works include House Mouse, Senate Mouse; Woodrow for President; and Liberty Lee's Tail of Independence. Their books have won numerous national and regional book reviews and awards. They also published the New York Times bestsellers Heartsongs and Journey through Heartsongs, by Mattie Stepanek. Cheryl is an illustrator with a background in architecture and is creative director of Regnery’s Little Patriot Press. Peter is a journalist who currently works for Fox Business Network; he has also reported for CNBC, The Wall Street Journal and other news organizations. They have two grown children and live in Alexandria, Virginia.
Loading...
or
Not Currently Available for Direct Purchase