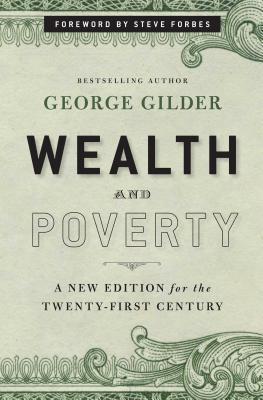 A New Edition for the Twenty-First Century

A CLASSIC THAT WILL IGNITE THE NEXT ECONOMIC REVOLUTION

Hailed as “the guide to capitalism,” the New York Times bestseller Wealth and Poverty by George F. Gilder is one of the most famous economic books of all time and has sold more than one million copies since its first release. In this influential classic, Gilder explains and makes the case for supply-side economics, proves the moral superiority of free-market capitalism, and shows why supply-side economics are more effective at decreasing poverty than government-regulated markets.

Now, in this new and completely updated edition of Wealth and Poverty, Gilder compares America’s current economic challenges with her past economic problems–particularly those of the late 1970s–and explains why Obama’s big-government, redistributive policies are doing more harm than good for the poor.

Making the case that supply-side economics and free market policies are–and always will be–the answer to decreasing America’s poverty rate and increasing her prosperity, Wealth & Poverty offers solutions to America’s current economic problems and hope to those who fear that our best days are behind us.

George Gilder, one of the leading economic and technological thinkers of the past forty years, is the author of nineteen books, including Wealth and Poverty, Knowledge and Power, The Scandal of Money, and Life after Google. A founding fellow of the Discovery Institute, where he began his study of information theory, and an influential venture investor, he lives with his wife in western Massachusetts.
Loading...
or support indie stores by buying on
(This book is on backorder)