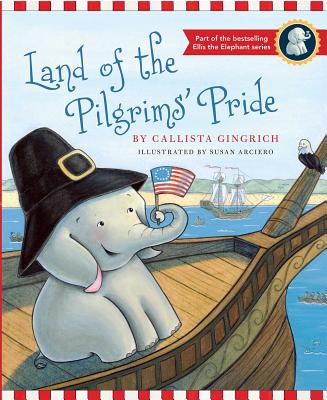 Land of the Pilgrims Pride (Ellis the Elephant #2)

In the New York Times bestseller, Sweet Land of Liberty, Ellis the Elephant sets off on a quest to find out how America became a free and exceptional nation. Now Ellis is back and ready to learn about the birth of our great nation in Land of the Pilgrims’ Pride. Written and illustrated by Callista Gingrich and Susan Arciero, Ellis once again educates and entertains as he discovers America's thirteen original colonies. Starting in Virginia, Ellis journeys through each of the colonies and learns about their unique characteristics. From Pocahantas to Benjamin Franklin, Ellis experiences life in Colonial America. Perfect for children ages 4-8, Land of the Pilgrims’ Pride will delight young and adult readers alike while exploring how America began.

Susan Arciero is an award-winning illustrator of numerous children's books, including Hail to the Chief, Christmas in America, From Sea to Shining Sea, Yankee Doodle Dandy, Land of the Pilgrims' Pride, Sweet Land of Liberty, Nat, Nat the Nantucket Cat and Cornelius Vandermouse: The Pride of Newport. Growing up in Massachusetts and traveling the world as a member of a military family, Susan lives in Pinehurst, North Carolina, with her husband, three children, and two basset hounds.
Loading...
or
Not Currently Available for Direct Purchase