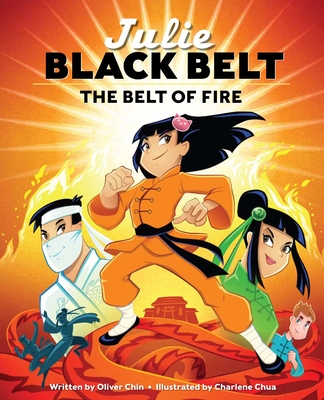 The Belt of Fire

Our energetic heroine Julie aims for her next martial arts rank - The Belt of Fire But will a new student get in her way?

This long-awaited sequel to Julie Black Belt: The Kung Fu Chronicles picks up as Julie proudly wears her yellow belt and is eager to attain her next rank: orange Still inspired by Brandy Wu, an action movie star, Julie now meets a new student in her class...but is he better than her? Can Julie learn to improve her abilities while becoming a gracious partner, and ultimately earning her own Belt of Fire? It's like when her heroine Brandy Wu in a movie seeks a treasure but must combat a mysterious opponent Another experienced teacher gives Julie valuable advice, but is Julie brave enough to make this wisdom her own? Artist Charlene Chua's colorful, action-packed illustrations make Julie's quest one that any aspiring martial arts practitioner, as well as their parents and instructors, will enjoy.

Children and parents identify with this spunky female star who is willing to give all she's got. Julie is a fan favorite and young readers make her vivid story their own. Again this is an engaging introduction of martial arts to young children who enroll in after school programs. Inspired by a real girl in a taekwondo class, this story's lessons are applicable to any martial art, such as karate, ju-jitsu, aikido, judo, and wrestling.

Oliver Chin has written The Tales from the Chinese Zodiac series, Baltazar and the Flying Pirates, Welcome to Monster Isle, Timmy and Tammy's Train of Thought, and The Adventures of WonderBaby. He is writing Julie Black Belt's sequel and lives in San Francisco, California. Charlene Chua was born in Singapore and raised on a diet of American cartoons and music in the midst of a booming Asian city. She now is an award-winning illustrator living with her husband and cats in Toronto, Canada, and illustrating Julie Black Belt's sequel.
Loading...
or support indie stores by buying on