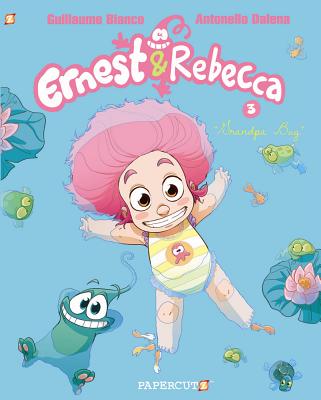 Rebecca and her older sister Coralie are sent to spend the summer in the countryside with their grandparents, away from their mother and father, without Ernest. Rebecca is lost and scared without her friend, but things begin to change when she meets a dog named Missile and her "Grandpa Bug," both of whom want nothing more than to be her friend.

“Ernest & Rebecca is Calvin and Hobbes for today’s generation of kids.” — COMIC ATTACK   “A clever and heartfelt read that will speak volumes to an adult reader, and give younger readers great characters they will want to return to in Volume 2.” — SPANDEXLESS   “Dalena’s art is lush and expressive, with an elegant line and Disney-like character designs.” — PUBLISHERS WEEKLY

GUILLAUME BIANCO wishes to tell stories for adults and children and raise big questions while entertaining. With Billy Fog, Eco, and Epictetus published in his native France and soon in America, his wish seems to be coming true! His work has been featured in the DISNEY FAIRIES series from Papercutz.ANTONELLO DALENA has drawn Donald Duck comics for Topolino and PK3 and drawn many of Disney's feature animation graphic novels and comics, including Atlantis, Cars, Toy Story, Bolt, Wall-E, Ratatouille, and Brave. His work has appeared in the DISNEY FAIRIES graphic novel series as well as SYBIL THE BACKPACK FAIRY, both from Papercutz.
Loading...
or
Not Currently Available for Direct Purchase