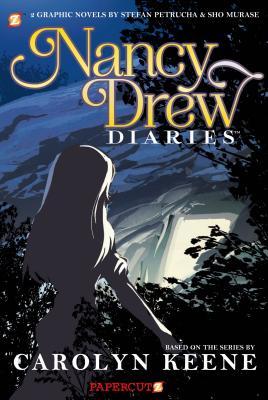 The Demon of River Heights & Writ in Stone (Paperback)

Nancy stars in a horror movie about a monstrous River Heights urban legend -- but is it really an urban legend? And will Nancy, Bess, and George live long enough to find out? Plus, it's double trouble for the world's greatest teen super sleuth in "Writ in Stone " A sweet young boy Nancy has often babysat has gone missing, and while Nancy picks up the trail, a historic stone marker that may prove the Chinese discovered America before Columbus is stolen Can Nancy solve two baffling mysteries at the same time, with all of River Heights watching?

STEFAN PETRUCHA is the author of such YA series as Timetripper, Split, and The Rule of Won, as well as THE THREE STOOGES, POWER RANGERS, PAPERCUTZ SLICES, and many other series from Papercutz. He has written X-Files comics for Topps, Disney comics for Egmont, and he was nominated for a Stoker Award for his graphic novel, Kolchak: The Devil in the Details.SHO MURASE is half Japanese and half Korean but her first language is Spanish because she grew up in Spain. She moved from Europe to Vancouver and from Vancouver to Maverix Studios in California, where she works in animation and draws comics that won't leave her enough time to sleep. She is the author of Sei, Death and Legend published by Image Comics and ME2 from Tokyopop.

Praise For The Demon of River Heights & Writ in Stone…

"Papercutz restarts Nancy Drew with new case files, and her first case is not to be missed." — SCHOOL LIBRARY JOURNAL

"A stellar script that is not only intriguing and complex, but sophisticated, and clever enough to keep the reader riveted. . . . Given this new upgrade, it is a sure bet that Nancy and her pals should easily last another 80 years." — EXAMINER