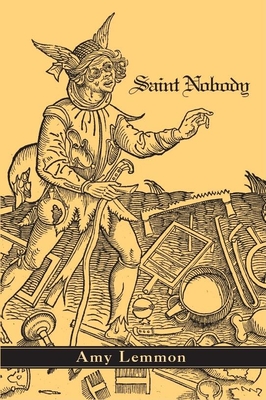 Amy Lemmon’s stunning and heart-wrenching debut, Saint Nobody, offers us a profound meditation on the body, on the tribulations and the hard-found joys of incarnation.  Lemmon does not shy away from a world where “vestigial angel-parts ache to emerge” and where there doesn’t appear to be a “speck of God.”  This piercing meditation takes the problem of the body, and the problem of the body in a world that often seems God-less, head-on, without flinching, and yet delivers us truths and beauty we would never have imagined.  Lemmon knows that we can’t count on the intercession of an absent saint, and she refuses easy solace.  Instead, she probes deeply into the pain, into the conflicting emotions of childbirth, into the birth of a child with Down Syndrome – which is probably the most extraordinary poem written on that subject – to understand the life of our body here, the body in which “pain is sharpest where my wings would be.”  This is a world of urine samples, “errant” chromosomes, lost kisses, first bleedings, chaotic cells, and scars, where the blood seems ours alone, and where the words are the only bread we have that may deliver us.  In the bread of her words, Lemmon has given us a profound sacrament.


Praise For Saint Nobody…

Saint Nobody is a book equally concerned with the language of the body and the body of language. Incisive, musical, and self-knowing, Amy Lemmon's poems map the territory of female experience, of loss and clear-sighted grappling with a life's challenges: a child with Down Syndrome, the twin pulls of memory and desire, self and other, transcendence and capitulation. This book beautifully renders what one poem calls "some wild abstract / you know exists but need / to be reminded of."

Amy Lemmon's Saint Nobody is a lushly lyric chronicle of exuberance and heartache.  Lemmon's poems are honest, transformative, capacious enough to hold the complexities of human relationships—motherhood, childhood, friendship, romance, and romance lost.  Her enormous capacity for empathy, her dizzyingly precise imagery, and her pitch-perfect storytelling all mark this marvelous debut.

With candor, with grace, in poems that are as sturdily built as dancers – and as poised – Amy Lemmon applies her strength to a subject that might daunt a poet of less balance and muscle:  the bearing and mothering of a challenged child.  “Persona non grata errata . . . my flawed and scary baby,” she writes, as she produces that rarity, a page turner book of poetry we dive into not because of the child, not because of the craft, but because of the body-intelligence in the dance between the two.  Lemmon explores childhood, sexuality, daughterhood, poetic theories, reading, writing, romance, music, painting and belief in Saint Nobody.  In her debut full-length volume of poems, this poet puts the force in tour de force.

Amy Lemmon is the author of two poetry collections: Fine Motor (Sow’s Ear Poetry Review Press, 2008) and Saint Nobody (Red Hen Press, 2009). Her work has appeared in Rolling Stone,New Letters,Prairie Schooner, Verse, Court Green, The Journal, Barrow Street, and many other magazines and anthologies. Amy holds a PhD in English/Creative Writing from the University of Cincinnati. She is Associate Professor of English at the Fashion Institute of Technology and lives with her two children in Astoria, Queens.
Loading...
or support indie stores by buying on