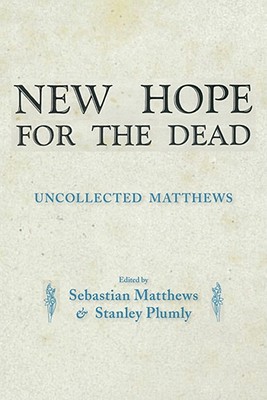 New Hope for the Dead


Praise For New Hope for the Dead: Uncollected William Matthews…

“William Matthews was a ubiquitous, humane and regal presence in American poetry for thirty years, and the room is sparser since he left. His famous melancholy and droll wit, diversely represented here, were larger than life, and warmer.

As a poet, Matthews practices a brilliant American version of Horatianism. Like those of  Horace, Matthews'  best poems are meditations so urbane and sincere, so fluently civilized, they do the impossible—restore the sullied reputation of rationality. His metaphors are superb, his knowledge dark and alive, his pitch perfect. He was and is the all around poet. He still has a lot of love to give.”

Sebastian Matthews is the author of the poetry collection We Generous (Red Hen Press) and a memoir, In My Father’s Footsteps (W. W. Norton).  He co-edited, with Stanley Plumly, Search Party: Collected Poems ofWilliam Matthews. Matthews teaches at Warren Wilson College and serves on the faculty at Queens College Low-Residency MFA in Creative Writing. Matthews co-edits Rivendell and serves on the editorial board of Q Ave Press, makers of handmade poetry chapbooks. He lives in Asheville, North Carolina.