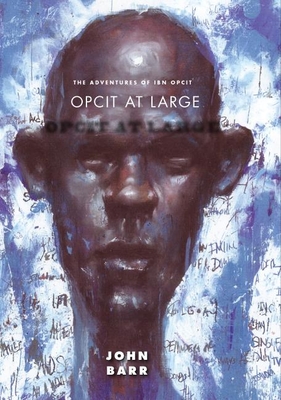 Book Two of The Adventures of Ibn Opcit

The Adventures of Ibn Opcit is a two-volume work by John Barr, first president of The Poetry Foundation. Grace, the first volume of this mock epic, is the master song of Ibn Opcit, a Caribbean gardener/poet condemned to die by torture. In a series of jailhouse monologues we hear him descant on justice, on creation, on America, on death and on life after death. In book two, Opcit at Large, the poet pushes back on his oppressors in three adventures. Like Virgil in the Inferno he visits the afterworld of reincarnation in “The Afterdammit;” he struggles to survive as poet laureate to Africa’s newest President for Life in “Opcit en Afrique;” he orbits earth as “The Last Cosmonaut” on the eve of the fall of the Soviet Union. He comes home with the dignity and strength of one who has survived and prevailed.

Praise For Opcit at Large: Book Two of The Adventures of Ibn Opcit…

“In Grace, not only does John Barr handle the demanding form of the long poem with skill and panache, but he delivers a one-of-a-kind linguistic tour de force. Spoken mostly in a Caribbean dialect and rollicking with word play, Grace achieves a riotous level of verbal inventiveness. I don’t know any other work with which to compare it unless we think of it as a kind of funky Finnegans Wake in verse with palm trees. You have never read anything quite like this wildly sustained imaginative drama. Set those one-page lyrics aside and dive into this momentous feat.”—Billy Collins

“I have relished reading Grace and rereading it many times. I think it is an extraordinary piece of writing, so daring and yet so joyfully positive. At times uproariously funny, and then, suddenly, so beautifully sad, a wondrous attempt to humanize the language that for me translates into sheer reading pleasure. I keep it on my small private bookshelf, it has given me a reading pleasure that doesn’t come often from new poetry these days.”—Alastair Reid, The New Yorker

“John Barr’s Grace is a wonderful surprise. It’s that rarest, rarest, rarest of phenomena, an enjoyable book of contemporary poetry. He’s on to something marvelous. The potential of his new approach is limitless.”—Tom Wolfe

“The six parts of [Grace] add up to a linguistic tour de force, verbal playfulness reminiscent of the work of James Joyce or Anthony Burgess. Grace is a unique reading experience, guaranteed to add spice to the ‘glum tostada’ of American poetry.”—Library Journal

Barr imbues his characters with such distinct voices and is so incredibly comfortable with wordplay and truly gifted at turns of phrase that the result is a (nearly guilty) pleasure to read.
—Booklist

“John Barr, writer of epic poems or poetic epics (the poetry-illiterate may not draw a distinction), has returned with Book II of The Adventures of Ibn Opcit. This second volume, Opcit at Large, mires our eponymous poet-hero in more than a few existential pickles…. Those enamored of clever turns of phrase will enjoy Opcit at Large. The stories are surreal, existential landscapes that beg a second read. Barr is a wizard at wordplay.”
—ForeWord Reviews

The poems of John Barr have appeared in many magazines and have been published in seven previous collections: The War Zone (1989), Natural Wonders (1991), The Dial Painters (1994), Centennial Suite (1997), all by Warwick Press; The Hundred Fathom Curve (1997) and Grace (1999), by Story Line Press; and The Hundred Fathom Curve: New & Collected Poems (2011) by Red Hen Press. Barr has served on the boards of the Poetry Society of America, Yaddo, and Bennington College, the latter as chairman. He has taught in the graduate writing program of Sarah Lawrence College, and was appointed in 2004 the first president of The Poetry Foundation, publisher of Poetry magazine. He lives in Chicago and New York. The Adventures of Ibn Opcit is his eighth collection.
Loading...
or support indie stores by buying on