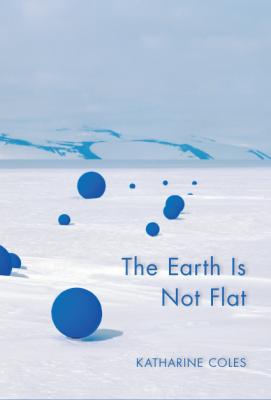 The Earth Is Not Flat

In 2010, poet Katharine Coles sailed across the Drake Passage to spend a month at a tiny Antarctic science station under the auspices of the National Science Foundation’s Antarctic Artists and Writers Program. The Earth Is Not Flat, the collection of poems written out of her adventure, invokes the vast land- and seascapes as well as the fauna—penguins, seals, whales, and scientists—she encountered along the way. Addressing not only the present reality of human habitation in Antarctica but also a rich history peopled by figures like Shackleton, Scott, and Amundsen, the poems bring Coles’ much-praised intelligence, passion, and humor to bear on subjects ranging from writing a grant proposal for scientists to heavy seas to the addictive potential of joy. Along the way, she continues her passionate meditation on reality and our place in it, using as her vehicles both the natural world and the human-created worlds of art, history, and science.

Praise For The Earth Is Not Flat…

“Katharine Coles sails to Antarctica and a takes a fresh and startled look at a world that seems first hand in these lucid, well-made, scientifically alert, precise, and bedazzled poems.”—Edward Hirsch

“Most of us will never see much less experience Antarctica. It doesn't matter, Katharine Cole takes us there through these searing and seering poems. Ice becomes a mirror to our psyche as well as a phenomenon of change. Climate science becomes the physics of consciousness. This is a book of witness.”
—Terry Tempest Williams

“Katharine Coles’ The Earth Is Not Flat captures the essence of Antarctica through its wonderful depictions of myriad forms of ice, rich diversity of sea life, and the people that carve out a life of science upon its shores. Collectively, the poems paint a poignant and prophetic story—not only of the raw and challenging beauty of this remarkable place—but of the interdependence of ice and life in a rapidly changing environment.”—James McClintock, Endowed University Professor of Polar and Marine Biology, author of Lost Antarctica: Adventures in a Disappearing Land


“This thrillingly perceptive collection assumes manifold lenses as a means of understanding extreme reaches of climate, geography, and human resilience. Katharine Coles’s expedition to Antarctica provided the catalyst for these mindsparking meditations on time and knowledge, perception and scale. Rugged terrain would be an understatement for the sublimely desolate wilds encountered. It is a world profoundly experienced and above all, noticed. Under Katharine Cole’s delicate, mindful scrutiny, reality shivers and restlessly reinvents itself.”—Alice Fulton

Katharine Coles is the author of five collections of poems and two novels. In 2010, she traveled to Antarctica to write poems under the auspices of the National Science Foundation’s Antarctic Artists and Writers Program; The Earth Is Not Flat comprises poems from that project. Coles is the recipient of fellowships from the NEA and the John Simon Guggenheim Memorial Foundation. Her poems, essays, and stories have appeared in such journals as The Paris Review, The Gettysburg Review, Poetry, North American Review, Southwest Review, DIAGRAM, and Ascent, and have been translated into Italian, Dutch, and Chinese. She has contributed invited chapters to Research Methods In Creative Writing (Palgrave-Macmillan, UK, 2012) and Teaching Creative Writing (Continuum Books, UK, 2008). As the inaugural director of the Poetry Foundation’s Harriet Monroe Poetry Institute, she edited and co-authored Blueprints: Bringing Poetry to Communities (University of Utah Press and The Poetry Foundation, 2011); co-authored Poetry and New Media: A User’s Guide, for which she also directed the working group; and co-facilitated the production of Best Practices in Fair Use for Poetry, produced by the Institute in partnership with the Center for Social Media at the American University. She is a full professor of creative writing and literature at the University of Utah, where she founded and co-directs the Utah Symposium in Science and Literature.
Loading...
or support indie stores by buying on