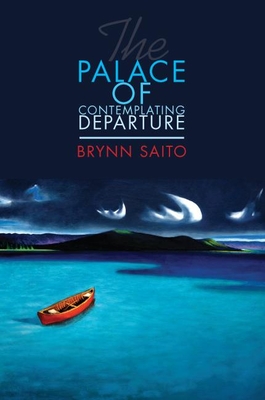 The Palace of Contemplating Departure

Brynn Saito’s debut collection of poetry begins in a cityscape and ends “deep in the cloud-filled valley,” traversing myriad terrains—both emotional and physical—as it weaves towards completion. From the bays of Denmark to the deserts of California, Saito’s searching lyricism gathers stories of sudden departures, forced removals, and the journeys chosen in between. Narrative selections inspired by childhood, sisterhood, lost loves and newfound freedoms are cased by interludes of otherworldly visions and persona poems spoken from many perspectives—animal and otherwise. This is a book about the ever-present capacity for wonder, transformation, and change: “The fighter is in me,” claims the speaker in the poem “Winter in Denmark,” “and the future is in me.” Inside every moment of rage or loss—beneath tough city sidewalks and under the quiet of a moonlit valley—is another moment, ripe with possibility and foretelling the future sky.

Praise For The Palace of Contemplating Departure…

“The Palace of Contemplating Departure brims over with exacting and devastating details of terrain—of the ‘heart’s quick chirping,’ and of the ‘future… a bright coin spinning in sunlight.’ Saito proves a brave and whip-smart guide to recount journeys (both forced and chosen) around the word and the world. With a lyrical insistence gracing these pages, these alluring poems will both terrify and entrance in such a way that when you finally look up and close the book, you will have to wonder when and where you are. A dazzling and gorgeous debut!”—Aimee Nezhukumatathil

“The body is merely a cage for the radiant and otherworldly in Brynn Saito’s startling debut collection, The Palace of Contemplating Departure. The manifold selves created here reside deeply inside mystery. These poems are fully alive as they struggle between opposing forces of life and death, conflict and peace, gods and demons, darkness and light, the material and heavenly. This is a sacred internal travel, carving its mighty shadow on the world. How vibrant is the voice of Brynn Saito; how angelic, bestial, seductive, and divine. The Palace of Contemplating Departure is an offering of the highest order, written in sanctuary, a promise on the tongue, a litany of urgent prayers.”—Tina Chang

“No wonder that Brynn Saito, even at a young age, is already a member of the country's literary establishment. Even her student poetry attracted the attention of Dame Helen Vendler. I think it's because unlike much of contemporary poetry, hers has depth.”—Ishmael Reed

“From the first pages of this brilliant new book readers will find a tough and vital vision that goes well beyond the personal, touching on aspects of American life you won’t have found expressed with such contemporary freshness and verve elsewhere. This largeness never inflates to bombast, but is guided by sympathetic wit and edgy, memorable phrasings. In one of her poems Brynn Saito writes, ‘It’s done: never again in my life / will I be only one thing.’ It’s her strong sense of mutability, even metamorphosis, I find most compelling. Real poetry by a real poet—one I expect to be reading for years to come.”—David Mason

“At times transparent and vulnerable, at others, sinuous with history and the breath of the supernatural, the heart of Brynn Saito’s first full-length collection beats dangerously, exhilaratingly, close to the surface. As it weaves its network of tales and voicings, we are confronted at every turn by the poet’s delightful knack for lyric surprise.”
—TAB: The Journal of Poetry and Poetics

Brynn Saito is the winner of Red Hen Press’s 2011 Benjamin Saltman Poetry Award. Her poetry has been anthologized by Helen Vendler and Ishmael Reed; it has also appeared in Ninth Letter, Hayden’s Ferry Review, Pleiades, and Drunken Boat, among other journals. Brynn was born in the Central Valley of California to a Korean American mother and a Japanese American father. She received an MFA in creative writing from Sarah Lawrence College and an MA in religious studies from NYU. Currently, Brynn lives in the Bay Area and teaches in San Francisco.
Loading...
or support indie stores by buying on