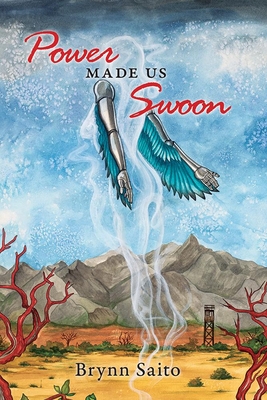 Power Made Us Swoon

Guided by the character of the Woman Warrior—witty, swift, and ruthless in her wonder—readers of Brynn Saito’s second collection of poetry traverse the terrain of personal and historical memory: narrative poems about family, farming towns, girlhood, and bravery are interspersed with lyric poetry written from the voice of a stone found in a Japanese American internment camp during the wartime incarceration. What can be known, through poetry, about a history that remains silenced? And what are the forces shaping an American life in the 21st century? Car accidents, patriarchy, television, and media fall under this poet’s gaze, along with the intergenerational reverberations of historical trauma. As with The Palace of Contemplating Departure, Saito’s first award-winning collection, Power Made Us Swoon, strives for wonder, and speaks—in edgy and vulnerable tones—of the fraught journey toward a more just world. “Learn to lie to survive,” sings the woman warrior, speaking on the themes of resiliency and survival. “Learn to outlast the flame / learn the art of surprise.”


Praise For Power Made Us Swoon…

“Seeing from positions on a 360-degree angle, Brynn’s surprise shifts in perspective can come sudden, from behind herself, describing the curve of her own spine, or from the eyes and sensibilities of stones witnessing construction of an internment camp, or from within an imaginary thought, a what if, a conversation with sky or ghosts, a bloody memory. Hers is a view from outside witnessing human experience—of nature itself watching. These time-and space-expanding images, requiring the skill of well-wrought poetry—poetry with a poetic—stay with the reader, and merge with a greater emotional, philosophical, and spiritual meaning.

Electric kaleidoscopic imagery, yet the center holds its intention/s. Wouldn’t it be amazing to write like this.”

“Between worlds do it sometimes seem move the forces of an inconnotable world and so Brynn Saito’s poems engage them on a level of narrative and lyric that be sometimes sorcerous, sometimes medicinal. The questions this book asks of its mythological and actual heroes are questions I want to know the answers to. Her own are brave—sure, you can expect that much—but they are also beautiful. As the poet reassures herself, “Your spirit is a songstress / occupying the sea.”

Brynn Saito is the author of The Palace of Contemplating Departure, winner of the Benjamin Saltman Poetry Award from Red Hen Press and finalist for the 2013 Northern California Book Award. Brynn co-authored, with Traci Brimhall, Bright Power, Dark Peace, a chapbook of poetry from Diode Editions (2013). Her work has been anthologized by Helen Vendler and Ishmael Reed; it has also appeared in Virginia Quarterly Review, Ninth Letter, Hayden’s Ferry Review, and Pleiades.Brynn is the recipient of a Kundiman Asian American Poetry Fellowship, the Poets 11 award from the San Francisco Public Library, and the Key West Literary Seminar’s Scotti Merrill Memorial Award. Recently, Brynn served as the Kundiman Writer-in-Residence at Sierra Nevada College. Born and raised in Fresno, CA, Brynn currently lives in the San Francisco Bay Area.