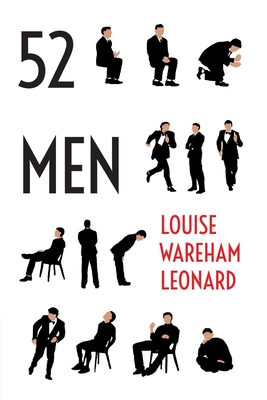 From a writer who master poet Seamus Heaney described as one “who risks much both stylistically and emotionally” comes 52 Men. Taut, spare and highly compressed autobiographical fiction for the mobile age, it is immensely funny and sexually charged. In contemporary literary miniatures from a few lines to a few pages, Manhattan-raised Elise McKnight describes the men in her life who gradually reveal her: high-profile cultural leaders, writers and celebrities, as well as the down-to-earth waiter, student and police officer. Fifty-two strange, romantic and sexual interludes and relationships spark to life and disappear in the wind, leaving the reader always asking: What is Elise’s power? What does she want and will she ever get it? Does she have a secret and if so, what is it? With surprising, sometimes shocking and moving cameos by figures from tabloids and the news: Jay Carney, Jonathan Franzen, Lou Reed, Michael Stipe; and encounters with artists, financiers, and a boxer who reads Neruda at the Turkish baths.

“52 Men is a haunting and haunted book about the world of women and men. It is mainly composed of elegant and brief portraits of our often deeply inelegant humanity. It is harsh and sweet and very funny, in spots as hard to read as it is hard to put down.”

“I'm not sure I've ever read a story of a life that's both so moving and told with such breathtaking economy and precision. 52 Men gave me goose bumps again and again.”

Louise Wareham Leonard writes with such rare intensity, rage, sadness and ferocious love, she lights up a world where expectancies and experiences of desire, sexuality and authenticity are redefined and exploded. Both devastating and, often, laugh-out-loud funny, her work has a savage purity—forgiving both all and nothing—demanding truth, wresting us from darkness to the ethereal, offering both solace and change. Born in New Zealand, she moved to Manhattan at age twelve, attended Columbia College and has received, amongst other awards, the James Jones Literary Society First Novel Award. She lives in upstate New York.
Loading...
or
Not Currently Available for Direct Purchase