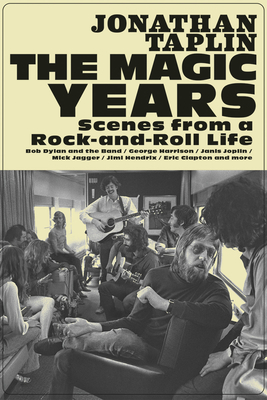 Scenes from a Rock-And-Roll Life

Jonathan Taplin's extraordinary journey has put him at the crest of every major cultural wave in the past half century: he was tour manager for Bob Dylan and the Band in the '60s, producer of major films in the '70s, an executive at Merrill Lynch in the '80s, creator of the Internet's first video-on-demand service in the '90s, and a cultural critic and author writing about technology in the new millennium. His is a lifetime marked not only by good timing but by impeccable instincts--from the folk scene to Woodstock, Hollywood's rebellious film movement, and beyond. Taplin is not just a witness but a lifelong producer, the right-hand man to some of the greatest talents of both pop culture and the underground.

With cameos by Janis Joplin, Jimi Hendrix, Eric Clapton, Martin Scorsese, and countless other icons, The Magic Years is both a rock memoir and a work of cultural criticism from a key player who watched a nation turn from idealism to nihilism. Taplin offers a clear-eyed roadmap of how we got here and makes a convincing case for art's power to deliver us from "passionless detachment" and rekindle our humanism.