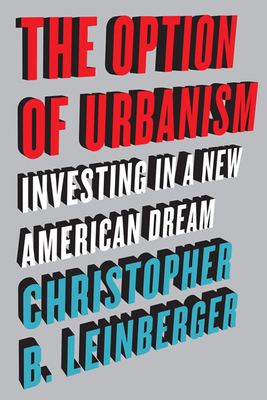 The Option of Urbanism

Investing in a New American Dream

Americans are voting with their feet to abandon strip malls and suburban sprawl, embracing instead a new type of community where they can live, work, shop, and play within easy walking distance. In The Option of Urbanism visionary developer and strategist Christopher B. Leinberger explains why government policies have tilted the playing field toward one form of development over the last sixty years: the drivable suburb. Rooted in the driving forces of the economy—car manufacturing and the oil industry—this type of growth has fostered the decline of community, contributed to urban decay, increased greenhouse gas emissions, and contributed to the rise in obesity and asthma.

Highlighting both the challenges and the opportunities for this type of development, The Option of Urbanism shows how the American Dream is shifting to include cities as well as suburbs and how the financial and real estate communities need to respond to build communities that are more environmentally, socially, and financially sustainable.


Praise For The Option of Urbanism: Investing in a New American Dream…

"Could it possibly be that [metropolitan] Washington, for years bashed by politicians, its [city] population shrinking and, at one point, almost bankrupt, has become a model of how the entire nation might smartly develop in the 21st century? I never thought I'd see the day. But Christopher Leinberger… makes a startling case for it… in his book."
— Washington Post Writers Group

"In his new book, the latest of his significant contributions to New Urbanism, Christopher Leinberger says American development comes in two basic patterns: 'drivable sub-urbanism' and 'walkable urbanism.' Leinberger's aim is to show how these two kinds of development function and to expalain why it's in everyone's interest to make sure that walkable urbansim becomes more commonplace."
— New Urban News

"The new American Dream presented in this quick and easy read is one similar to the American Dream of the past: a slower-paced and neighborhood-centric lifestyle."
— Planetizen's Top 10 Books List, 2008

"In delightfully readable prose, Professor Leinberger overwhelms us with the advantages of development that is dense enough and mixed enough to make walking and transit worth it, while illuminating the unintended urban consequences of land use regulations, Wall Street finance, and the eleven o'clock news."
— Douglas Kelbaugh, FAIA, dean and professor of architecture and urban planning, University of Michigan

"Chris Leinberger has spent many years thinking about real estate economics and how our culture is affected by our built environment. This book offers a cogent argument for changing that environment to achieve more lasting values, both economic and cultural."
— Robert Davis, developer and founder of Seaside, Florida

"Leinberger, a developer who teaches real estate at the University of Michigan, may be the boldest prophet of walkability anywhere."
— Alan Ehrenhalt

"The Option of Urbanism: Investing in a New American Dream is free of jargon and, more important, free of ideological resentments."
— Planning

"In this book, [Chris Leinberger] carefully explains the decisions that have made the 'drivable suburban' model the dominant one and highlights the obvious and unintended consequences that come from spending 35 percent of the nation's wealth building in this way, to the virtual exclusion of other approaches."
— Civil Engineering

"Christopher Leinberger, a visiting fellow at the Brookings Institution who has called for D.C. to revisit its building-height limits, tracks the politics that led to auto-based development and shows how developers and their financial backers can build more sustainable communities. He doesn't mince words."
— Washington Business Journal

"Leinberger isn't just a theoretician. He's a former new urbanist land developer. As he shows, if we're serious about reducing our car dependency, we need to go beyond making the personal decision to walk; we need to advocate for chagnes that will make walking a viable option for more Americans."
— Realtor magazine

"In The Option of Urbanism, Leinberger deftly shares his wealth of knowledge through the musings of a writer, the patience of an academic, and the technical abilities of an active developer. The book is straightforward and manages to be an enjoyable reading experience for just about anyone interested in where the developing landscape goes from here."
— Urban Land

"In The Option of Urbanism, Christopher B. Leinberger aims to present a happy alternative to the usual apocalyptic accounts of urban srpawl and its consequences."
— Next American City

"Christopher B. Leinberger admirably chronicles the real estate industry's critical role in the evolving nature of the Americna Dream. Drawing equally from history, professional experience, research and pop culture, he makes a very readable case for the desirability and realization of the next American Dream—walkable urbanism. Reading his analysis reinvigorates my passion for the dynamic potential of our industry."
— Albert B. Ratner, co-chairman of the board of directors, Forest City Enterprises, Inc.

Christopher B. Leinberger is a developer, professor, consultant, and author whose work has focused on making progressive development profitable. He is currently a Visiting Fellow at the Brookings Institution and is director of the Graduate Real Estate Program at the University of Michigan. He is a founding partner of Arcadia Land Company, a progressive real estate development firm, and has written award-winning articles for publications such as The Atlantic Monthly and The Wall Street Journal.
Loading...
or
Not Currently Available for Direct Purchase