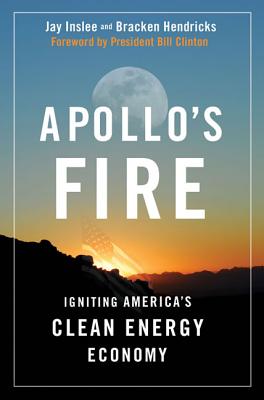 In 1961, President John F. Kennedy ignited America’s Apollo Project and sparked a revolution in space exploration. Today the New Apollo Energy Project is poised to revolutionize the production of energy and thereby save our planet. The nation that built the world’s most powerful rockets, its most advanced computers, and its most sophisticated life support systems is ready to create the world’s most powerful solar energy systems, its most advanced wind energy turbines, and its most sophisticated hybrid cars. This will result in nothing less than a second American Revolution. Who are the dreamers in California who believe they can use mirrors and liquid metal to wring more electricity from a ray of sunshine than anyone else on earth can?

Who are the innovators who have built a contraption that can turn the energy of a simple wave off the Oregon coast into burnt toast in Idaho? Who are the scientists in Massachusetts who have invented a battery that now runs your hand drill and will soon run your car? Readers will meet them all in this book. They will learn how the new energy economy will grow, the research that is required, and the legislation that must be passed to make the vision a reality.

This is a thoughtful, optimistic book, based on sound facts. No one before has tied together the concepts of economic growth and greenhouse gas reductions with such concrete examples. No one has previously told the real stories of the people who are right now on the front lines of the energy revolution. The co-authors, one a U.S. Congressman who is the primary sponsor of the New Apollo Energy Act, and the other the founder of the Apollo Alliance, have joined their experience, expertise, and passion for a clean energy future to lay out the path to stop global warming and gain energy independence.

"...a passionate argument for the economic shift the authors say is necessary to ease America into a clean-energy revolution."
— Associated Press

"Representative Inslee is a nuanced thinker and speaker. . . Apollo's Fire is as characteristically rational and up front."
— TreeHugger

"The book evokes the national focus on reaching the moon in the 1960s to advocate a comprehensive array of policy and technological solutions."
— Science News

"Apollo's Fire is one of the more comprehensive, balanced, and upbeat books out there now about America's energy situation… It encourages people to think big, while instilling a sense of urgency. It has a message of hope, not futility."
— Toledo Blade

"Apollo's Fire is a ... summons to shake ourselves free from the physical and political corruptions of oil."
— Seattle Times

"Their vision is true to America's competitive spirit … It is innovation for the improvement of humanity. It is science as stewardship. This is our errand into the wilderness, and it is our obligation to our children and to the global community. Apollo's Fire calls us to our destiny."
— President Bill Clinton, in his foreword to "Apollo's Fire"

"Apollo's Fire is a breath of fresh air and optimism about how America's ingenuity and enterprise can stop climate change. Jay Inslee and Bracken Hendricks provide a rousing call for all of us to protect the environment by using the inspiring stories of people around the country who already are."
— Donna Brazile, political strategist and analyst

"At Virgin, we know you don't get anywhere without vision. Here in Apollo's Fire is the compelling, bold vision in energy the world needs to beat global warming."
— Sir Richard Branson, founder and chairman of the Virgin Group

"For those of you who want to move beyond the doom and gloom of the global warming dialogue, Apollo's Fire fits the bill. Set in a frame of optimism and urgency, this book thinks big and shows that innovation, curiosity, and imagination already are driving the beginnings of an Apollo-like leap toward necessary solutions. The authors' sweeping and attainable vision for America's energy independence shows we can once again reach for higher goals and succeed."
— Robert Redford, actor and director

"Apollo's Fire is a brilliant, inspiring book on the need to set goals and find future solutions to achieve clean, efficient energy. It is beautifully written, exciting, and hopeful. It's a must read for every American who wants to save the planet."
— Helen Thomas, Hearst Newspapers columnist

"And so Apollo's Fire shares the stories of dozens of dreamers, inventors, scientists and more who are taking global warming seriously, and are doing their part to fight it."

Jay Inslee is a Representative in the United States House of Representatives, representing the First District of the State of Washington, in the Seattle area. He is a recognized leader in Congress on energy issues and is the prime sponsor of the New Apollo Energy Act, a comprehensive plan to build a clean energy economy in America. Congressman Inslee was elected in 1998 and serves on the Energy Subcommittee of the House Energy and Commerce Committee. He was recently named by Nancy Pelosi to the new House Select Committee on Energy Independence and Global Warming.

Bracken Hendricks is a senior fellow with the Center for American Progress and former executive director of the Apollo Alliance, an organization of environmental organizations, businesses, and labor organizations dedicated to building a new energy future for America. Mr. Hendricks formerly served as Special Assistant to the Office of Vice President Al Gore and the National Oceanic and Atmospheric Administration where he worked on the Interagency Climate Change Working Group. He holds a Master’s Degree in Public Policy and Urban Planning from Harvard’s John F. Kennedy School of Government.