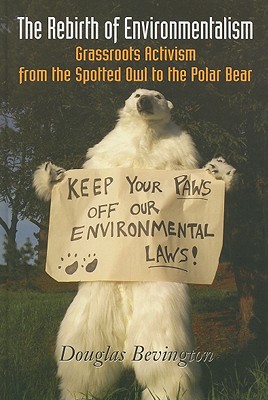 The Rebirth of Environmentalism

Grassroots Activism from the Spotted Owl to the Polar Bear

Over the past two decades, a select group of small but highly effective grassroots organizations have achieved remarkable success in protecting endangered species and forests in the United States. The Rebirth of Environmentalism tells for the first time the story of these grassroots biodiversity groups. Filled with inspiring stories of activists, groups, and campaigns that most readers will not have encountered before, The Rebirth of Environmentalism explores how grassroots biodiversity groups have had such a big impact despite their scant resources, and presents valuable lessons that can help the environmental movement as a whole—as well as other social movements—become more effective.

Praise For The Rebirth of Environmentalism: Grassroots Activism from the Spotted Owl to the Polar Bear…

"This is an important and timely examination of the environmental movement, past and present. The politics of protecting America's wild places can be slow and infuriating, but Bevington does a first-rate job of showing how the struggle pays off, and why the stakes are so high."
— Carl Hiaasen, author of "Nature Girl"

"The environmental movement is an ecosystem of its own, and Douglas Bevington does a fine job examining the understory that flourishes in the shade of the big green groups. This will be a useful text for those trying to figure out how to build the global warming movement in the years ahead."
— Bill McKibben, author of "The End of Nature"

"In The Rebirth of Environmentalism, Douglas Bevington tells how radical and resource-poor biodiversity activists came to be at the center of environmental policy change. Deeply researched and persuasively argued, this book invites social movement scholars to rethink ideas not only about the relations between movement radicals and moderates but also about the tactical ingredients of movement success."
— Francesca Polletta, Professor, University of California, Irvine

"With a sociologist's keen eye, Douglas Bevington gives us a close-up account of the 'alternative environmental movement' that emerged in the 1990s. His cogent analysis offers a robust counterpoint to name-brand environmentalism and to critics who declared the movement dead. Essential reading for serious students of conservation—and anyone interested in the future of Planet Earth."
— Deborah A. Sivas, Professor of law and director of the Environmental Law Clinic, Stanford Law

"Mr. Bevington, a sociologist, has put together a very useful profile of many small groups. They are thriving and making a difference."
— InBrief

Douglas Bevington is the forest program director for Environment Now, a grantmaking foundation based in California. He received his PhD in sociology from the University of California, Santa Cruz, where he taught courses on social movement studies.
Loading...
or
Not Currently Available for Direct Purchase