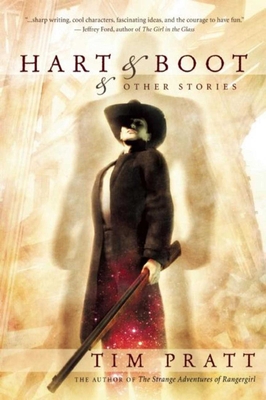 Tim Pratt’s (Little Gods, The Strange Adventures of Rangergirl) Hart & Boot is a stunning collection of thirteen stories of the fantastic.

Hart & Boot & Other Stories collects thirteen stories of love, death and monsters, including new story "Komodo," a tale of lizards, sex magic and dangerous men. The title story, "Hart & Boot," was chosen by Michael Chabon for inclusion in The Best American Short Stories: 2005.

Critics have called Pratt’s short fiction “Quite Gaimanesque…” and this comparison is not unfounded. His straightforward storytelling techniques, combined with an uncanny ability to convey a sense of wonder and the fantastic, are part of the reason why the title story to this collection was selected by Michael Chabon for inclusion in The Best American Short Stories 2005 anthology.

Tim Pratt has been nominated for the Nebula, the John W. Campbell, and the Mythopoeic Fantasy awards, and his work (including “Bottom Feeding,” herein) routinely finds its way to the Locus Recommended Reading lists. In 2005, he won the Norton Award. His fiction has appeared in numerous anthologies and magazines, including Polyphony, The Year’s Best Fantasy and Horror, Lenox Avenue, The Third Alternative, and Realms of Fantasy.