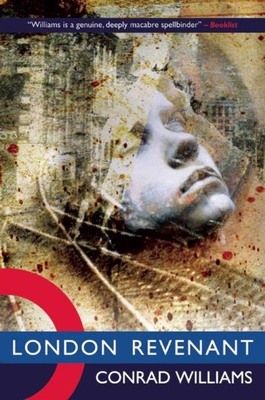 London Revenant is a dark and magical exploration of London and the tenebrous world that lies beneath it.

A madman is pushing people in front of Tube trains. Adam Buckley has a feeling it might be someone he knows. But that is the least of his worries. His narcolepsy is worsening, sucking him into an uncertain, twilight state. He sees people at parties he has no memory of, but who seem to know him.

Deep within London’s sprawling Underground, he sees shadowy figures beckoning him into tunnels not shown on any map. His friends are drifting away, intent on chasing down insane, uncharted zones hidden within the capital, and they seem to be succumbing to a strange wasting disease. The suggestion of a half-remembered life and the encroaching shadow of violence threatens to engulf Adam and everyone he knows, unless he can unveil his true identity and that of his stalking nemesis.

Conrad Williams’ masterful novel peels back layer upon layer of the city’s skin to reveal the grinning skull that lies beneath.

Conrad Williams is the award-winning author of seven novels, four novellas, and two collections of short stories. He has won the British Fantasy, August Derleth, and International Horror Guild awards. Williams lives in Manchester with his wife and three sons.
Loading...
or
Not Currently Available for Direct Purchase