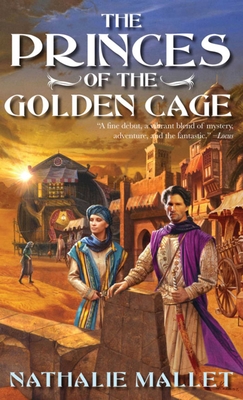 The Princes of the Golden Cage (Prince Amir Mystery Series)

Prince Amir lives in a lavish and beautiful cage. He shares a palace with over a hundred of his brothers, all barred from ever leaving until he, or one of his brothers, becomes the next Sultan. Living under constant threat of death at the hands of his scheming brothers, Amir has chosen a life of solitude and study. But his scholarly and alchemical pursuits bring him under suspicion when, one by one, his brothers are struck down by darkest sorcery.

Amir’s monastic existence is also turned upside-down when he falls passionately in love with the beautiful Princess Eva, an exotic visitor from a far-off kingdom. Alas, the princess is destined to marry the next Sultan–and Amir has dozens of more ambitious brothers vying for the throne… assuming they survive the unnatural menace preying on their royal blood.

To clear his name, Amir must track down the true source of the darkness stalking the palace. But even if he can somehow save his rival brothers, must he then watch one of them wed the woman he loves? Or will he die without ever setting foot outside his opulent cage?