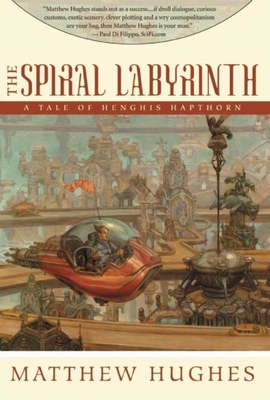 The universe continues to shift away from logic and reason, rewriting its basic operating system, bringing about a new age of sympathetic association, or magic.

It was bad enough when Henghis Hapthorn, Old Earth’s foremost discriminator and diehard empiricist, had to accept this coming of a new age of magic. Now he no longer has the leisure to anticipate and prepare for the inevitable changes. Hapthorn finds himself cast forward and stranded several centuries in the future. This new world of contending wizards and hungry dragons is a difficult one to assimilate, and Hapthorn must do so without his magic-savvy alter ego.

Worse, some entity with a will powerful enough to bend space and time is searching for him through the Nine Planes, bellowing “Bring me Apthorn!” in a voice loud enough to frighten demons.

Matthew Hughes has lead a successful writing career—first as a journalist, then as a staff speechwriter to the Canadian ministers of justice and environment, and as a freelance corporate and political speechwriter in British Columbia. He resides in a small town on Vancouver Island, off Canada’s west coast.
Loading...
or
Not Currently Available for Direct Purchase