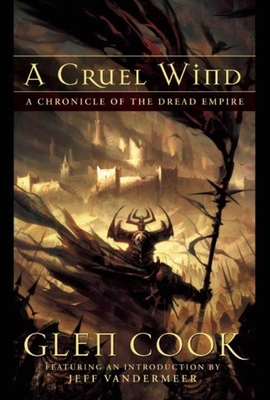 “Glen Cook is a rare beast of a writer – he can vacillate between military fantasy, space opera, epic fantasy, mystery, and science fantasy with great ease. His writing is often marked by a purity; that he is depicting life in its most real sense, from the thoughts in a character’s mind to the wind rushing across his or her face.”—SFFWorld

A Cruel Wind: A Chronicle of the Dread Empire collects the legendary Dread Empire trilogy: A Shadow of All Night Falling, October's Baby and All Darkness Met.

The war that even wizards dread begins with A Shadow of All Night Falling. Across the mountains called Dragon's Teeth, beyond the chill reach of the werewind and the fires of the world's beginning, above the walls of the castle Fangdred, stands Wind Tower, from which the Star Rider calls forth the war that even wizards dread. A war fought for a love. The love of a woman called Nepanthe, princess to the storm kings. . . .

When the leaves turn blood and the wind turns bone, it is time. A time for doing things dark and strange; the time of October's Baby. The princess bears a child to the winged thing and the cries are heard far beyond the peaks of Dragon's Teeth. Nepanthe and Mocker wait, but for what, they do not know.

At Empire's end, Mocker finds old friends in the halls of death. Nepanthe finds new lovers in the fields of blood and bone, while the war-child wields the sword of truth. The Star Rider's dread secret is at last revealed, where All Darkness Met. And so it ends. Though end is but a wizard-word for new beginnings. . . .
or support indie stores by buying on
(This book is on backorder)
Copyright © 2020 American Booksellers Association